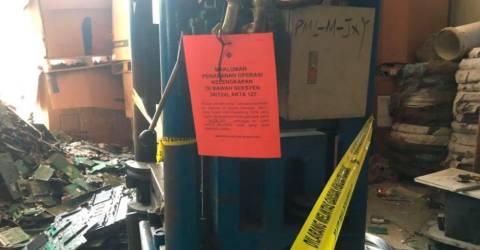 SHAH ALAM: The Selangor Department of Environment (DOE) has suspended the operations of three electrical and electronic waste (e-waste) warehouses in Telok Panglima Garang, Kuala Langat on Tuesday for operating without the department’s approval.

Its director Nor Aziah Jaafar said the simultaneous operation by the DOE enforcement officers was carried out after receiving complaints from environmental NGOs in the area.

“The case is being investigated in accordance with Sections 34B, 34A, 18 and 19 of the Environmental Quality Act, 1974 and relevant regulations,“ she said in a statement today.

Nor Aziah said initial investigations found that the warehouses, suspected to have only been operating a few months ago, are being leased to foreigners to carry out the dismantling of e-waste components.

“DOE is still investigating the owners and tenants of the premises for further action,“ she said. – Bernama