Foreign Secretary Dominic Raab has clung on to his seat despite a pro-EU backlash in his Remain-backing constituency seeing his vote share cut dramatically.

The battle for Surrey’s Esher and Walton seat had been billed as a potential ‘Portillo moment’, following Michael Portillo’s shock defeat in 1997 when Labour’s Stephen Twigg sensationally ousted the sitting Conservative minister.

However, Mr Raab held on to win, despite the Liberal Democrats getting a 18 per cent swing in a seat that has returned Tory MPs for over 100 years.

Standing on stage in the brasserie room at Sandown Park Racecourse in Esher, Mr Raab broke into a rare smile as the result was announced.

Speaking to the BBC, Mr Raab said: ‘The story here was the collapse of the Labour vote and obviously some tactical voting.

He added that the election ‘felt a little bit like a referendum because of the way the tactical voting went, but at the end of the day we secured half the vote share and that gives us a very strong mandate’.

‘But actually the key is to hold, as we’ve done, seats in the South, and make gains where we can, but also to make sure we can speak to some of those aspirational working class constituencies that have heard what we’ve got to say north of the M25.’ 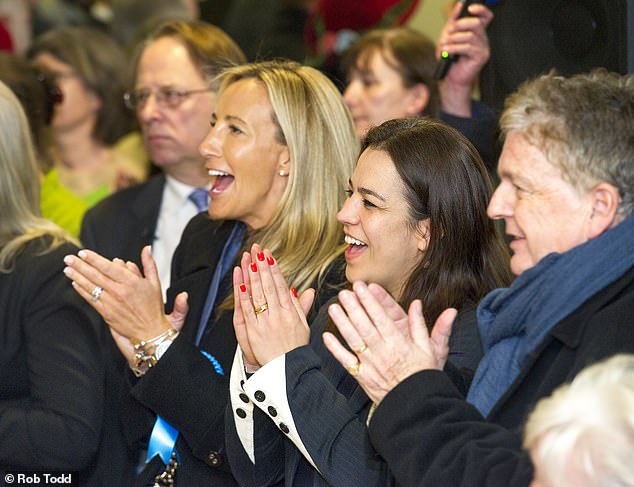 At the end of his speech, the 30-odd Conservative activists erupted in cheers, before Mr Raab embraced his wife Erika, who was dressed in a black blazer and white trousers.

His triumphant demeanour was a marked change from a couple of hours earlier when he arrived by a side door at 12.50am.

He briefly greeted Conservative party activists before pouring over a laptop screen as the results filtered through.

He paced the hall more than three times, noting down votes in a small pocketbook.

His victory dispelled pre-polling day fears that he would be ousted by the Liberal Democrat challenger, Monica Harding, who received 28,389 votes.

Mrs Harding led a resurgent campaign, promoting her parties ‘Stop Brexit’ policy which chimed with voters in the constituency – 58 per cent of whom voted for Remain in the 2016 referendum. 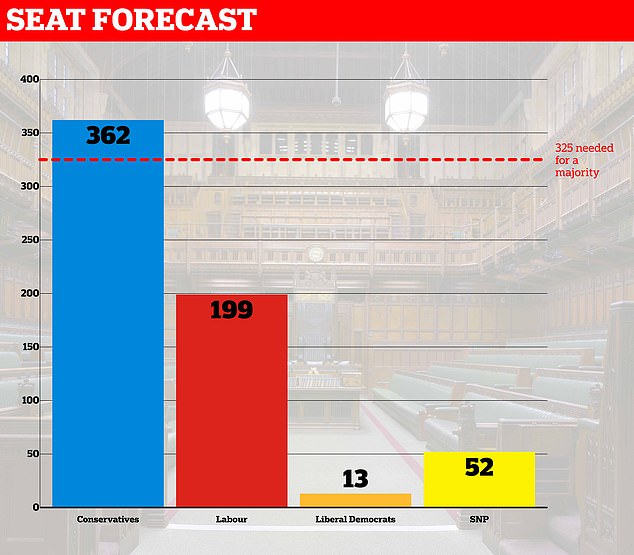 Mr Raab’s pro-Brexit stance threatened to totally undermine his 23,000 majority from 2017 with pollsters YouGov predicting earlier in the week that Mr Raab’s advantage had been cut to less than two points over the Liberal Democrat’s Mrs Harding.

Their analysis suggested that if a quarter of Labour supporters in the Remain-backing constituency voted tactically, they could deliver victory for the Liberal Democrats.

However, it did not materialise on the night as Mr Raab’s victory was announced at 3.15am.

Mr Raab, who served as the Brexit secretary following the resignation of David Davis, ran in the Conservative leadership election this summer, losing out in the second round of the contest.

In the last six weeks he had campaigned on local issues, including a pledge to build two new secondary schools – Cobham Free and Heathside Walton – by 2021, as well as the the simple ‘Get Brexit Done’ strategy.

He had also opposed Liberal Democrat proposals to build on parts of the green belt.

Ian Taylor, Mr Raab’s Conservative predecessor in the Esher and Walton seat, had written to constituents during the election campaign.

The former MP, who served between 1987 and 2010, told the people of Esher and Walton that he no longer recognised the Conservative party and urged them to back the Liberal Democrats.

Mrs Harding, a married mother-of-four who lives in the same village as Mr Raab – Thames Ditton – had campaigned on her party’s nationwide ‘Stop Brexit’ policy as well as opposing Heathrow expansion.