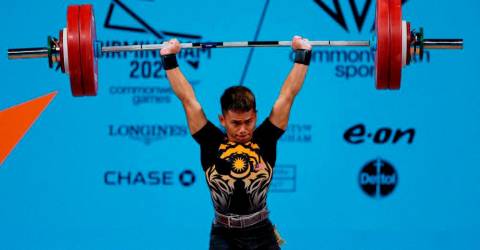 KUALA LUMPUR: The National Sports Council (MSN) will continue to extend help to develop weightlifting despite the doping issue marring the sport at the recent 20th Malaysian Games (Sukma).

Its Director-General Datuk Ahmad Shapawi Ismail said the doping issue will not disrupt weightlifting which is still under consideration to be reinstated as a core sport.

“The help we give to the Malaysian Weightlifting Association (PABM), especially for the development of the sport, sometimes exceeds that of core sports.

“So, I think the doping issue has nothing to do with the core sport matter because what is important is that we continue to look for talent in weightlifting,“ he told a press conference after the signing of a sponsorship agreement between MSN and hijab company TudungPeople International Sdn Bhd here. today.

MSN had taken over the task of organising the weightlifting competition in the 20th Sukma following the drastic action of PABM to withdraw from the Games because there were three doping cases involving the sport.

Weightlifting was among three sports dropped from the country’s core sports list besides sepak takraw and taekwondo in 2017, following the worsening performance of the weightlifting sport and various disciplinary problems such as the failure of some of its athletes in doping tests.

In the meantime, Ahmad Shapawi admitted to being surprised by the statement by Olympic Council of Malaysia (OCM) secretary-general Datuk Mohd Nazifuddin Najib that the latter will send an official letter to MSN to support PABM’s action concerning the 20th Sukma because he was one of the members of the special technical committee that approved the rules of the competitions of the recent Sukma.

The Sukma Organisng Committee in an earlier statement had stated that the chefs de mission meeting on Sept 15 and the meeting attended by all the directors of the State Sports Councils, had agreed that the weightlifting competition would go ahead at the Sukma without banning all members of the contingent involved in the doping cases.

However, the committee explained that it respected PABM’s position and that weightlifting could be held if it is officially included in the Sukma Rules and each state is informed of the matter.

Meanwhile, Ahmad Shapawi informed that the collaboration between MSN and Tudung People will continue until 2024 whereby the company will sponsor hijabs for national female athletes including at the 2024 Paris Olympics.

TudungPeople founder, Fazrena Abdul Aziz wants to prove that her company’s move to sponsor hijabs for national female athletes can open people’s eyes that wearing scarves or hijabs is not an obstacle to making a name for oneself or being active in sports. – Bernama