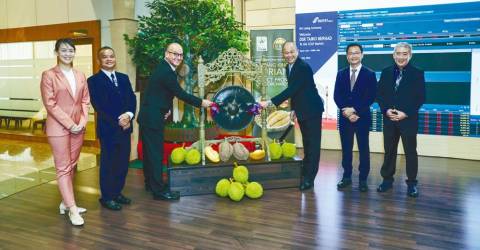 PETALING JAYA: DSR Taiko Bhd made a strong debut on the LEAP Market of Bursa Malaysia today, opening at 92 sen per share, tripling its reference price of 30 sen for a 62 sen premium.

Group CEO Datuk Ng Lian Poh said that it has raised gross proceeds of RM25.75 million, making it the highest funds raise for a LEAP listing so far.

The funds raised has been mostly utilised for the acquisition of durian plantations landbank in Bentong in line with its expansion plans. This will increase its durian yield which will allow the group to venture into the overseas markets.

DSR Taiko is an integrated durian producer specialising in upstream to downstream value chain of durian agribusiness. It owns 33 parcels of durian plantation land located in Raub and Bentong with an aggregate landbank of 40.08ha, with a majority of Musang King durian trees followed by D24 and Black Thorn variants.

Furthermore, through a joint venture partnership with Daily Fresh International, the company has to date developed and commercialised a variety of downstream durian-based products.

Currently, the products are being sold online and are also available physical stores such as their D MasKing flagship stores located in Bentong and Lot 10 shopping complex in Kuala Lumpur as well as selected Daily Fresh kiosks in Malaysia.

Ng said the company believes that “Origin Matters”, and their Musang King durians which are planted in traditional growing areas located in Bentong and Raub are widely known to be one of the highest quality durians.