Mother seals can recognise their pup’s voice from just two days old, a study has found.

Researchers said this ability makes sense because it helps both mothers and their babies survive during a perilous time.

When newborn elephant seals are suckling, mothers lose about half of their body mass, with their babies seeing a seven-fold increase in weight.

This is because of the ‘exceptional fat content’ of their mother’s milk.

Recognition: Mother seals can recognise their pup’s voice from two days old, a study has found

BABY SEALS CAN CHANGE THEIR TONE JUST LIKE HUMANS

Baby seals can change their tone of voice in response to different sounds just like humans, a study found.

Scientists in the Netherlands played sea noises to baby harbour seals (Phoca vitulina), which have a wide range around Northern Europe.

Nearly all of the pups lowered the tone of their voice when they were played more intense soundscapes, the experts found.

The findings suggest seals have ‘vocal plasticity’, the ability to alter the tone of their voice, which is a rare trait in mammals beside humans.

The study was conducted at the Max Planck Institute for Psycholinguistics (MPI) in Nijmegen, the Netherlands.

But while the early recognition is logical, what puzzled researchers was why female seals sometimes feed each other’s pups.

‘Females fast for the entire month they are nursing,’ Dr Caroline Casey, who was part of the study by the University of California Santa Cruz, told the BBC.

‘So it makes no [evolutionary] sense for them to use their resources on another mother’s pup.

‘But at this site [a colony in California] that we study, there have been a lot of observations of females feeding pups not related to them.’

One theory Dr Casey has is that humans may be to blame.

She said elephant seals were hunted to near extinction during the late 1800s, so the animals alive today – around 300,000 – are related to about 20 seals that survived.

This means the genetic similarity between elephant seals is high and may explain why mothers want to feed other pups of closely-related females.

Now researchers hope to find out if the seals are more likely to feed the pups of sisters or cousins.

For their study, which led by Dr Juliette Linossier, the international team of scientists recorded calls of individual pups using a microphone on the end of a long pole. 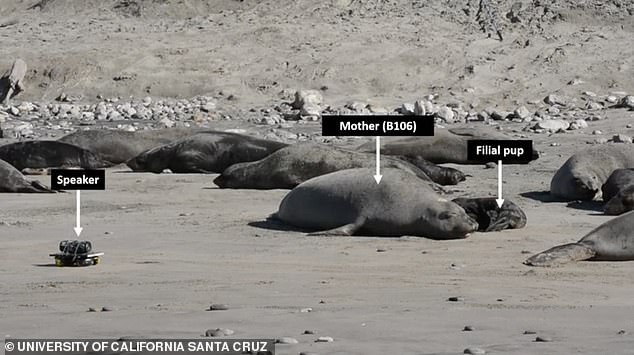 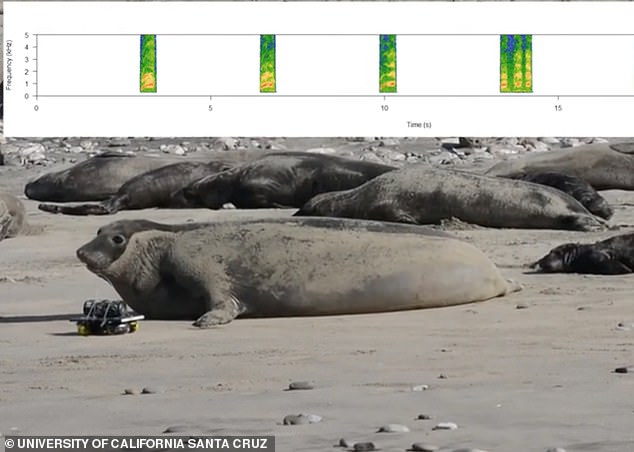 For their study, which led by Dr Juliette Linossier, the international team of scientists recorded calls of individual pups using a microphone on the end of a long pole. They then played the recordings to mother elephant seals with a small speaker (pictured)

They then played the recordings to mother elephant seals with a small speaker and monitored their responses to both their own babies and other calls from a pup of a similar age.

Researchers said the mothers were much more interested in investigating the speaker and moving towards it when it was playing the sound of their own pup.

‘This is a rare demonstration of individual recognition among phocid mothers and their offspring, and suggests that consistency in maternal responsiveness may be an important social factor influencing the pup’s growth and survival,’ the authors wrote in their paper.

The research has been published in the journal Royal Society journal Biology Letters.