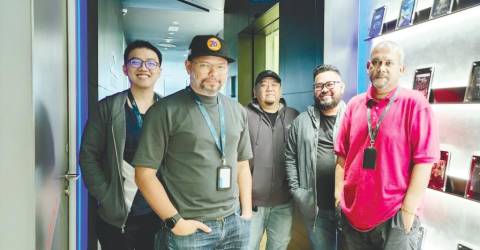 STRATEGICALLY located between Virtuos’ Singapore headquarters and its largest Asian studios in China and Vietnam, Kuala Lumpur was a natural expansion for the company.

“After we arrived in Singapore, our focus on the region became stronger, and we thought that Malaysia, with 30 million people and many of them gamers, was too big of a country to ignore,” explained Virtuos CEO Gilles Langourieux.

When a team of senior gamers, born and raised in Malaysia, wanted to return to the country to build a studio, Virtuos didn’t hesitate.

“Virtous is excited to contribute to Malaysia’s digitalisation and growth as a regional game development hub”.

The global network of studios under Virtuos has contributed to iconic games including Assassin’s Creed, Call of Duty, Final Fantasy, Horizon Forbidden West, and Medal of Honor: Above and Beyond for Meta Quest 2.

Each returned home to launch the studio.

“I am pleased to return home to build Virtuos Kuala Lumpur alongside some of my closest friends and pioneers in the industry,” said Mufizal.

Since the studio’s soft launch in early 2021, its team has grown to 90 employees.

Virtuos Kuala Lumpur hopes to expand its capability to engineering and programming.

Due to being founded by local games industry pioneers, Virtuos Kuala Lumpur is intent on creating high quality, technical jobs in Malaysia for Malaysians.

“We don’t want to focus on only one particular aspect; we want a full range of jobs.”

Gilles claimed that Virtuos has ambitions to grow the Kuala Lumpur headcount to 300 by the end of 2025.

According to Malaysia Digital Economy Corporation (MDEC) CEO Mahadhir Aziz, Virtuos’ commitment towards developing digital talent and creating high-value job opportunities is aligned to the goals of the government agency.

The launch of Virtuos Kuala Lumpur will be a significant addition to Malaysia’s fast-developing video games sector.

In collaboration with the Malaysian government, Virtuos will focus on further expansion and the training of new talent.

These include Virtuos Academy and internship programmes.

When it comes to training up talents through the academy, Virtuos acknowledges the importance stemming from the high demand for AAA game titles, and the studio will also be working with schools so that students and graduates will be able to get an education with Virtuos Kuala Lumpur.

“We want to create high quality, technical jobs here in Malaysia for Malaysians. We don’t want to focus on only one particular aspect; we want a full range of jobs,” said Mokhtar.

Though Virtuos is known for game development, the company has also contributed to some of the most successful Marvel Cinematic Universe films.

When asked whether Virtuos Kuala Lumpur – due to Malaysia’s growing digital animation industry – would be involved in film project, Mokhtar told theSun that while it is a possibility, the studio is first and foremost currently focused entirely on bringing up the local game development industry.

“But, that does not close the door for us to dabble in systems that allow us create movies as well, because we see a convergence between the VFX industy for movies and video games. Currently, the focus is on video games”.