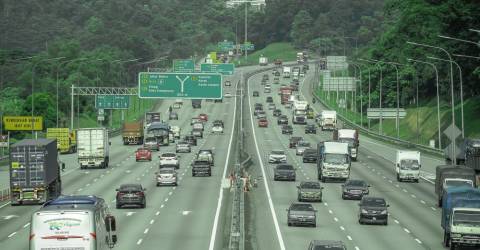 JOHOR BAHRU: Four million vehicles are expected to enter the state from Friday to next Tuesday, with the upcoming Chinese New Year (CNY) celebrations.

Johor Road Transport Department (JPJ) deputy director Mohd Edir Sanip said as traffic has already doubled up, an enforcement operation to run from today until Jan 27, will be intensified to curb violation of traffic rules.

“Following discussions with PLUS Malaysia Berhad on the expected increase in vehicles, we will ensure that this enforcement operation runs smoothly with the deployment of 170 personnel from all divisions,“ he told a press conference at Kempas R&R here today.

He said JPJ would patrol 45 accident hot spots on highways and main roads, mainly in the Johor Bahru district.

He said inspections on bus depots and terminals, undercover monitoring on buses and a motorcycle Ops will also be carried out.

“Similarly, there is a restriction on goods-carrying vehicles before the CNY festival starts from Jan 20-21 and after the festival from Jan 24-25,” he said. – Bernama