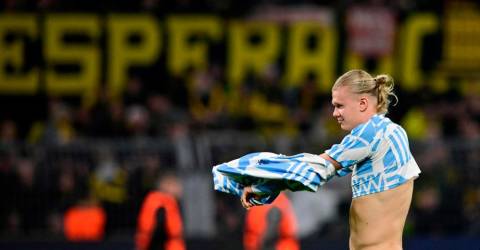 DORTMUND: Manchester City manager Pep Guardiola said he is unsure if star striker Erling Haaland will miss this weekend’s match at Leicester, after the Norwegian was substituted with injury against Borussia Dortmund on Tuesday.

Haaland picked up a knock in City’s 0-0 Champions League draw away against Dortmund and was withdrawn at half-time.

“Today we were pretty exhausted,“ Guardiola said. “Erling Haaland took a knock, but he was running normally again just now.

“We’ll see how that turns out.”

In Haaland’s absence, Riyad Mahrez stepped up to take a second-half penalty, but his shot was saved by goalkeeper Gregor Kobel to help Dortmund into the knockout rounds.

City, who are through to the Champions League last 16 as Group G winners, travel to Leicester for Saturday’s early Premier League fixture.

Haaland has scored 17 goals in 11 league appearances for City this season since joining from Dortmund in the summer. – AFP