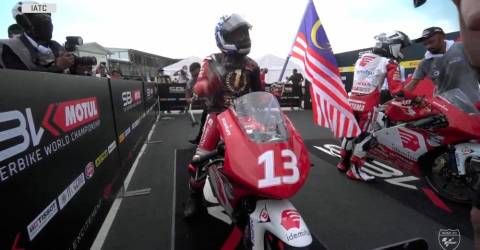 The success saw Muhammad Hakim, better known as Hakim Danish, become the first Malaysian and the second rider from Southeast Asia to win the overall title since the (Moto3) trophy race was first introduced in 2014.

In the second race of the last round at the Mandalika international street circuit today, the 15-year-old Terengganu-born rider finished in second spot behind Indonesian Vede Ega Pratama, thus collecting a total of 187 points to top the rider standings.

His closest challenger (for the 2022 ATC season), Shinya Ezawa from Japan had to settle for second place with a total of 177 points after finishing third in the second race.

Meanwhile, the success of winning two rounds of the race in Lombok allowed Vede Ega to collect a total of 141 points and seize third position in the rider’s ranking list from another Japanese rider Gun Mie.

In the first race that took place on the same circuit yesterday, Carter Thompson from Australia finished second while Hakim Danish was third.