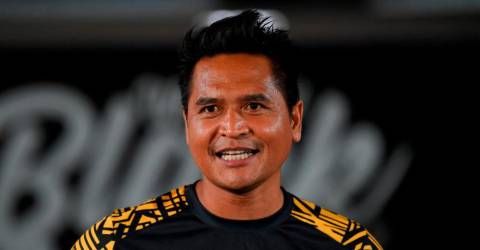 KUALA NERUS: The spirit of Terengganu FC players was much different and stronger when playing on home turf and in front of over 11,000 supporters, which inspired their 1-0 win against Kedah FC at the Sultan Mizan Zainal Abidin Stadium here last night.

Coach Nafuzi Zain(pix) said all his boys were tired due to tight schedule matches, but the overwhelming support from the home fans gave the Turtles the extra boost needed to qualify for the FA Cup quarterfinals.

“The journey was not easy (for TFC), but with the effort, commitment, and characteristics shown by each player, Alhamdulillah, it was our rezeki (day) tonight (last night).”

“The players went all out to win, and the supporters who filled up the stadium made the players forget their mental fatigue,” he told reporters after the match.

However, he reminded the players not to feel too comfortable and that they should continue to work harder for the upcoming matches.

Meanwhile, the Canaries coach, Aidil Sharin Sahak, admitted that although his boys displayed an excellent performance last night, luck was not on their side.

“They tried their best. We cannot expect a striker to score goals in each game. My players are fighters. My job is to boost their morale again,” he added.

TFC’s winning goal was scored by midfielder Mohd Faiz Mohd Mansor, who headed in a cross by Mohamad Faisal Abdul Halim in the sixth minute.

In the 51st minute, TFC were reduced to 10 players as defender Pape Abdoulaye Diakite was sent off for pulling down Wanja Ronald Ngah, denying the latter a goalscoring chance.-Bernama