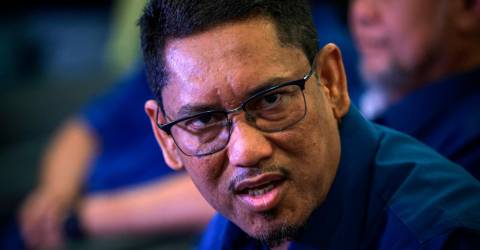 IPOH: A housing initiative to benefit more than 50,000 families is one of the efforts in the five main thrusts of Perikatan Nasional (PN) manifesto in Perak for the 15th general election (GE15).

Its chairman Datuk Seri Ahmad Faizal Azumu (pix) said the Perak PN is of the view that every family that does not own a house should be given the opportunity to apply for a site to enable them to build a house according to their family’s capability.

“There is no doubt that there are still many residents who do not own their own homes, and there are also those who live in slums.

“So, in this regard Perikatan Nasional is of the view that the plight of this group needs to be properly addressed. Hopefully, as many as 50,000 families are expected to benefit from this initiative,“ he said in his speech at the launch of Perak PN Manifesto here today.

Ahmad Faizal who is the incumbent MP for Tambun said the manifesto themed ‘PN Improves State with Prosperity Initiative Agenda’ is based on five main pillars with a focus on education, social, women, infrastructure and environmental sustainability.

He said if PN was given the mandate to rule the state, they would ensure the organisation of free al-Quran and civics classes in each state constituency and planned to open Al-Quran and Fardu Ain (KAFA) classes from year 1 to year 6 besides free book fee aid to ease the burden of parents.

Apart from that, he said Perak PN is committed to ensuring that women are competitive and could advance in the economic field and to produce more female entrepreneurs through the New Women’s Economic Employment Opportunities Development Plan (EWB).

“PN is also determined to increase the value of the Kasih Ibu Darul Ridzuan card from RM290 to RM400 per month. It is in line with the increase in the purchase of basic necessities and health expenses,“ he said.

At the press conference afterwards, Ahmad Faizal said the PN manifesto was launched two days before polling day after his party received feedback from the public during the campaign period regarding things that could be improved in the state. – Bernama