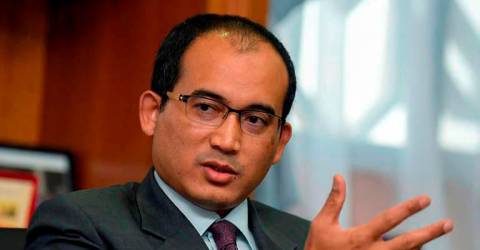 KUALA LUMPUR: The Malaysian Immigration Department has busted an alleged money-changing syndicate led by a Bangladeshi following the arrest of six men, including the mastermind, in a special operation around the capital on Aug 19 and 20.

Immigration director-general Datuk Seri Khairul Dzaimee Daud(pix) said all the men aged between 26 and 40 were arrested in raids on three kiosks selling telephone and electronic equipment and a travel agency kiosk suspected of carrying out money-changing activities without a licence.

He said the operation was carried out following the arrest of a Bangladeshi man who acted as a runner for the syndicate on Aug 18.

“All those arrested are workers and caretakers at the kiosk. The syndicate’s 36-year-old mastermind did not possess any identification documents when he was arrested,“ he said in a statement today.

Khairul Dzaimee said cash amounting to RM44,035 suspected to be from money-changing activities was also seized, besides books and records of remittances to countries such as Bangladesh and Indonesia.

He said the department suspected that the syndicate was also acting as an agent for foreign workers, as 15 Bangladeshi passports were also seized in the raids.

He added that all the suspects were taken to the Semenyih Immigration Detention Depot in Selangor for further action.-Bernama