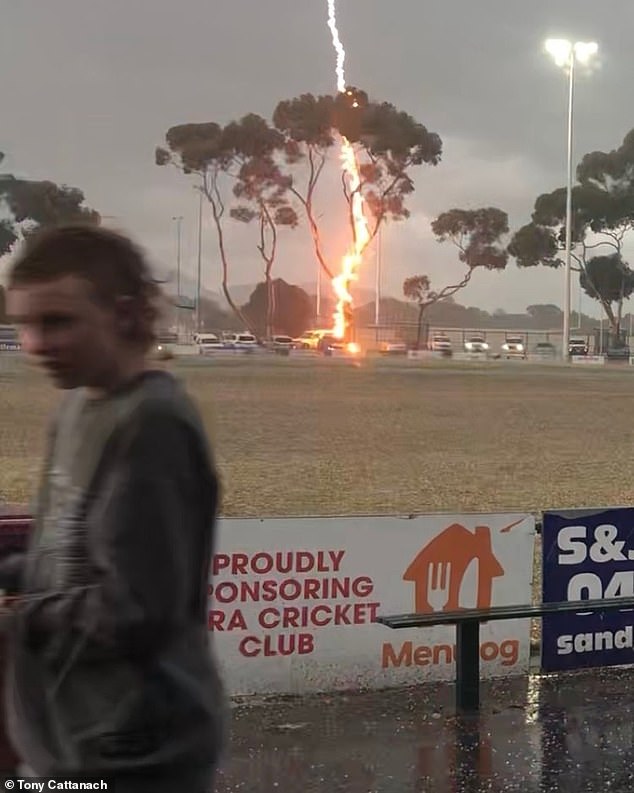 Spectators at a footy game in Geelong were sent running for shelter on the weekend when a huge bolt of lightning struck a tree just metres from players and fans.

The Lara seniors team was playing St Joseph’s in the Geelong Football League at Bisinella Oval at Lara when Mother Nature unleashed her fury.

The players had been taken off the field as ominous black thunderstorm clouds blanketed the ground and hail began to fall.

Minutes later, a ferocious crack was heard as the lightning struck a tree just 30 metres from where the footy players had previously been running.

‘Was inside the sportsman bar and to say the least everyone s$&@ themselves,’ spectator Danni Daffy posted on social media.

The game was called off as a result.

While nobody was injured, it was a close fall for the parents of a player who were sitting in their car just one metre from where the lightning bolt struck.

Tony Cattanach managed to get spectacular footage of the lightning strike and he said the sound was terrifying.

‘I reckon the whole crowd was spooked. Everyone seemed to shudder and duck for cover as the crack went through,’ he told The Age.

When watching the video back a few minutes later, Cattanach saw he had captured a video of the large lightning bolt.

‘I was blown away, couldn’t believe it,’ said the 53-year-old St Joseph’s supporter and past player. ‘I just happened to be pointing my phone in the right direction at the right time. Just lucky, I guess.

‘It was pretty amazing.’

John Mckinnon is on the St Joseph’s committee and said he had not experienced anything like it in 40 years involved with footy.

‘He said, ‘there’s going to be some bad weather coming through’, and everyone goes, ‘yeah, no worries, Ray’. But he was checking the weather system on his phone and he was true to his word,’ Mckinnon said.

‘We didn’t get rain, we just got hail. It lasted for two or three minutes.

‘The lightning and thunder came and it was pretty horrific. All the players just ran off the ground.

‘There was more lightning and thunder and they said no, it was too dangerous and came back off the field.’