For hour upon hour, the nation’s airwaves were filled with the roars of the real BBC — the Big Beast Collective.

The former Speaker raged and told Nigel Farage that his arguments were ‘copper-bottomed rubbish’.

Prime Minister Boris Johnson speaks after retaining his seat at Uxbridge and South Ruislip, at the count at Brunel University, on December 12 Behid him are Lord Buckethead and Count Binface 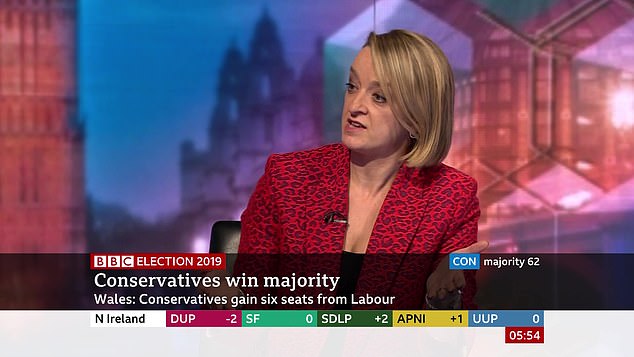 She joined in the general Nige-kicking on BBC1, telling Farage that he was ‘a strange beast’, as if they were on a blind date together that had gone horribly wrong. No wonder the poor old thing looked more frog-eyed than ever.

Throughout the long night, the big names of the Collective jostled for position, fangs poised for the killer soundbite, ever ready to chow down on the juiciest nugget of news.

On BBC1, Andrew Marr said his ‘jaw was on the floor’ at some of the Conservative gains. Pesto (ITV) was oddly marooned at a desk in a corner of the studio, rather like a budget-hotel receptionist. There, he could trot out tru-facts in his usual staccato Mekon-speak, between checking in guests for the weekend. 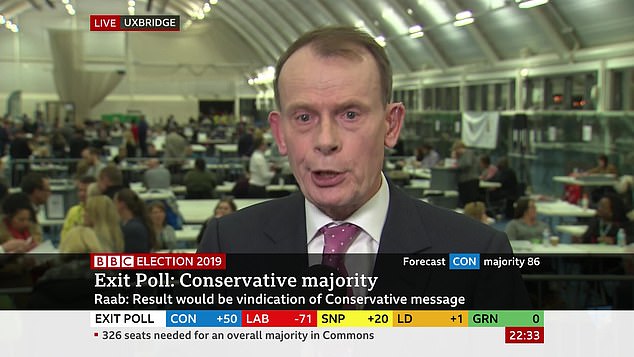 Andrew Marr said his ‘jaw was on the floor’ at some of the Conservative gains. He claimed ‘the last time they had a leadership election almost immediately led to the election of Jeremy Corbyn’

Andrew Neil (BBC1) was an agreeable turn, heartlessly landing blows upon the reddening bruise as the Labour vote collapsed in its former heartlands. ‘Is it time for you to stand down? It must surely be game over,’ he said to John McDonnell, who looked as chirpy as a freshly dug-up corpse. 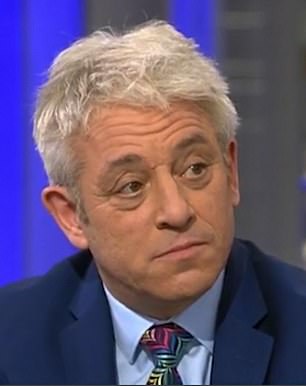 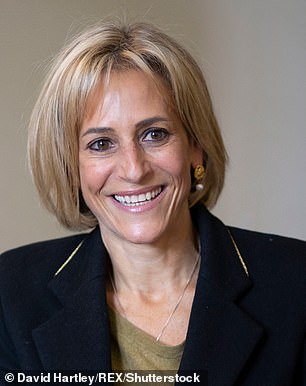 ‘Are you hallucinating?’ Neil barked.

It was a question I asked of myself when BBC reporter Clive Myrie appeared at dawn in Downing Street. He wore a nice woolly scarf with matching gloves and looked suitably solemn.

Yet, although there were serious matters afoot, Clive’s innocent but unerring gift for innuendo could distract the most focused political mind. ‘Has he pulled it off?’ he wondered, before answering his own question in the positive. ‘Boris Johnson is inside No.10, savouring the moment.’ 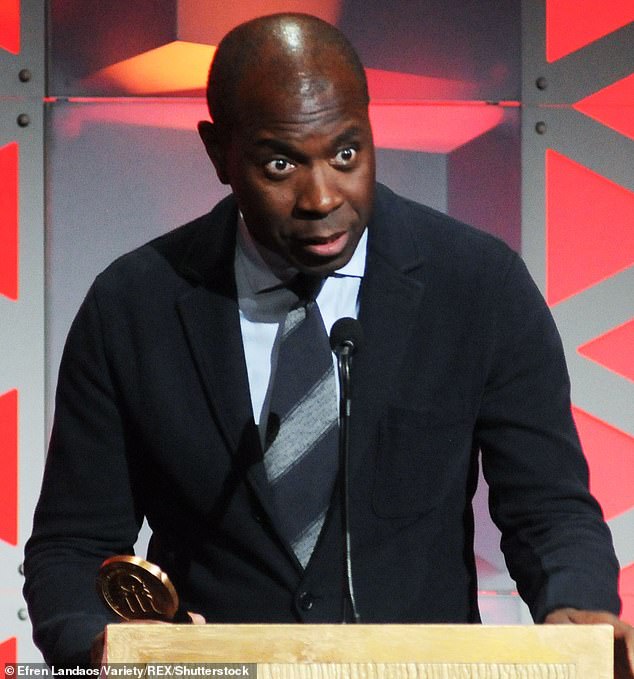 BBC reporter Clive Myrie (pictured in May, 2018) distracted the mind when he said ‘Boris Johnson is inside No.10, savouring the moment’ at midnight

Along with anchor Emily, he was waiting for the Prime Minister to leave for Buckingham Palace for his audience with the Queen. Suddenly we were caught in that terrifying news abyss where nothing happens, but the airways still have to be filled.

‘Are the curtains twitching?’ wondered Emily, but Clive’s mind was elsewhere. ‘We are all twitching ourselves here in the media pack,’ he said. It must have been super-enjoyable, because five minutes later he added: ‘I have lost all feeling in my right leg.’

But where, oh where, was Boris? Still rearranging salad bags in the crisper drawer of the fridge? He had been spotted earlier in his constituency, standing alongside fellow candidates Lord Buckethead, Count Binface and a giant Elmo at the count. It was worrying how perfectly at home he looked in that freaky line-up.

Sleuthing Emily had her eyes on the prime ministerial car, which had purred into Downing Street. ‘The Jag is heading off,’ she reported. ‘No, it is reversing back.’ 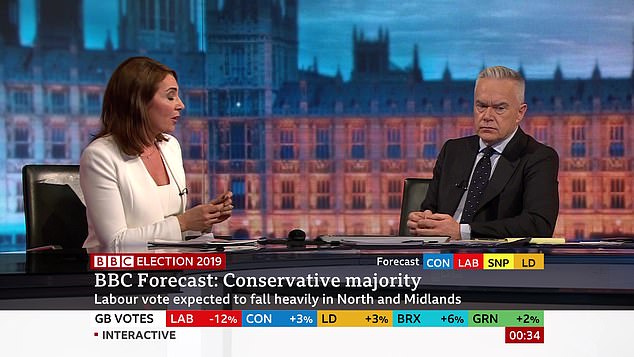 Huw Edwards took the helm for BBC’s overnight coverage of the general election before being joined by Laura Kuenssberg, Katya Adler, Faisal Islam and Amol Rajan, along with Professor John Curtice for the results

Darling, this is a manoeuvre called ‘parking’ which most viewers might be familiar with, although it was nice to have it explained.

There was a super-embarrassing moment when Emily thought a bald security man of vaguely Asian appearance was the Chancellor of the Exchequer, somehow weirdly demoted to opening car doors for the leader. ‘Here come Boris Johnson and Sajid Javid,’ she said. Oops.

All too soon it was time for BBC royal expert Nicholas Witchell. He was stationed outside the Palace, speculating wildly about what the Queen might be saying to Boris. 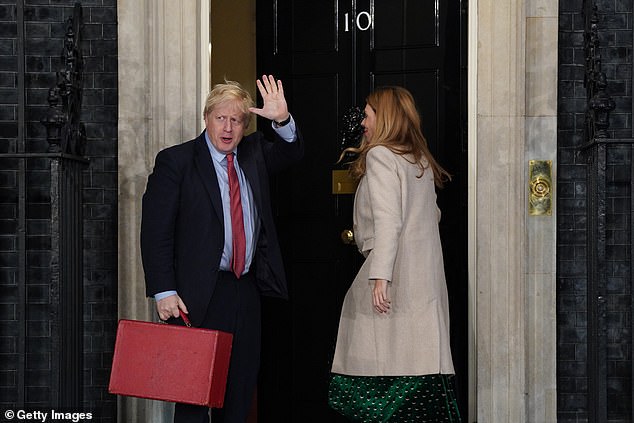 ‘She can be very astute in her questioning — she is very curious,’ he ventured, as if he were talking about a bright toddler or perhaps even a budgerigar called Queenie.

Emily echoed this rather patronising theme about a monarch who has seen 14 prime ministers serve under her. ‘The Queen is very politically interested. She reads the political gossip of Westminster avidly,’ she said. Good to know!

Throughout Election Night, the Collective were keen to express how hard they were working. ‘We have several hours to talk about this,’ said Huw Edwards on BBC1. This was his first time as election anchor and he had a new haircut to celebrate. I liked it!

It was a kind of silver foxy demi-quiff, held in place by a quart of seal oil. Underneath this glory, Huw was a solid and granite presence throughout. One solitary flicker of emotion sparked in his Welsh breast when the Wrexham result appeared. ‘Which just happens to be my birthplace,’ he gasped.

Sophie Raworth was skipping about outside the studios on a giant map of the UK, with coloured tiles representing each constituency. Like some incomprehensible game of Twister, she would pull them up and re-lay them as the results came in. 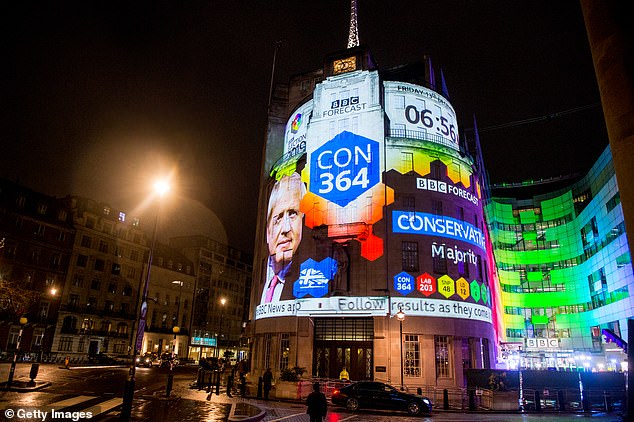 Throughout the long night, the big names of the Collective jostled for position, fangs poised for the killer soundbite, ever ready to chow down on the juiciest nugget of news

‘The blue heart in the red circle, that is Tom Watson,’ she said, tapping the tile with her toes.

Actually, Watson was a guest on C4’s alternative election show, where host Krishnan Guru-Murthy promised: ‘We will talk about both Islamophobia and anti-Semitism, we have eight hours.’

Although it did the heart good to see the glum expressions of Left-wing smugerrati such as David Baddiel and Nish Kumar, I turned over when a female comedian made a ghastly, unfunny quip about sanitary products and Workington Man.

Why would anyone turn back when the BBC had something far funnier — Naga Munchetty at the Blyth Valley count, stating the obvious about counting votes. 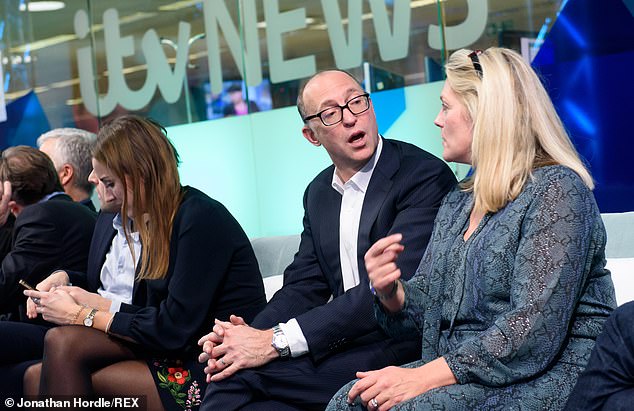 ITV’s general election coverage (pictured, ITV newsroom) had a lot of energy and good guests but the graphics were less impressive than the BBC

‘It is very much about accuracy,’ she opined. And she wonders why Jeremy Vine, bristling with information, gets paid so much more.

ITV had a lot of energy and good guests, but less impressive graphics than the BBC. On Good Morning Britain (ITV), someone called Harry ventured that Boris ‘could stuff a sausage roll in his mouth and it looked like it belonged there’.

‘It is going to be a long morning,’ said host Piers Morgan and it certainly was. On the BBC, Emily now had Conservative Party chairman James Cleverly in her studio.

‘James, were you expecting anything of this size?’ she murmured. Oh, where was Clive Myrie when we needed him most? Still in Downing Street, contemplating what was going on behind closed doors. ‘David Cameron tried it once, Theresa May tried it once and now Boris is trying it once, too,’ he informed viewers.

Now look. That’s quite enough sauce from everyone. Until the next election, at least.