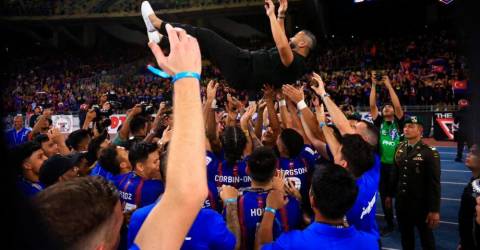 The experienced goalkeeper said their 2-1 victory over Selangor FC in the final at the Bukit Jalil National Sradium here last night, completed the glorious achievement of the Southern Tigers by sweeping all three major trophies this season, in addition to emerging as champions of the Charity Shield Cup.

Mohd Farizal, 36, is even prouder as he and his teammates managed to maintain an unbeaten record in all domestic competitions this season, namely the FA Cup, Super League and Malaysia Cup.

“This victory means a lot to all the players because we dominated all the trophies in the Malaysian League and were also unbeaten in all domestic tournaments, this is an extraordinary thing.

““Next year our target will definitely be higher because we have won everything this season and next year will also be different because the league competition has additional teams and matches, I hope the players are ready,“ he said at a press conference after the final.

The final of the prestigious tournament saw Selangor take the lead in the 45th minute thanks to Herlison Caion De Souza Ferreira’s penalty kick before JDT bounced back to score two goals, with Bergson Da Silva on the mark in injury time of the first half and Fernando Forestieri in the 59th minute.

The success enabled JDT to achieve the “treble” for the first time, in addition to successfully repeating the achievement of winning the Malaysia Cup in 2017 and 2019 and putting behind the disappointment of losing in the final of the last edition to Kuala Lumpur (KL) City FC.

Meanwhile, Mohd Farizal, who has donned the JDT jersey since the 2015 season, admits that he has not thought about retirement and is still eager to help the team achieve more success.

“As long as I am given the trust and as long as I don’t have any serious injuries and so on, I will definitely give it my all,“ said Mohd Farizal, who did not rule out the possibility of taking up coaching after retirement.-Bernama