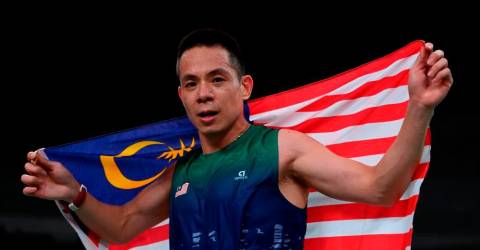 KUALA LUMPUR: Who can stop the ‘invincible’ Cheah Liek Hou (pix) in Japan?

On paper, the reigning men’s singles Paralympic Games champion in the SU5 category (physical impairment) is well on course to capture his seventh crown in the 2022 Badminton World Federation (BWF) Para-Badminton World Championships to be held in Tokyo.

The numbers don’t lie as the world number one shuttler’s impressive record of clinching 13 titles on the trot en route to Japan would definitely put him as the hot favourite and a player to beat in the tournament.

However, Liek Hou, who remained humble with his current winning run, insisted that he would not take the challenge in Japan lightly.

As the SU5 men’s singles category had always been the bragging rights between Liek Hou and Indonesian Dheva Anrimusthi, the Kuala Lumpur-born shuttler said in fact, there were three other players who are capable of posing a potent threat in the World Championships.

Apart from world number seven Dheva, the 34-year-old shuttler pointed out tha the three others were Fang Jen-Yu of Taiwan, currently ranked second, followed by Taiyo Imai of Japan and another Indonesian shuttler, Suryo Nugroho.

“I believe all these players have improved a lot in my category (SU5),” he told Bernama.

Asked on his preparations to reclaim the title from Dheva, Liek Hou, who departed for Japan today, said he still needs to fine tune on his strength and explosive shots in the tournament.

Liek Hou, who is now under the tutelage of Indonesian coach Nova Armada, also hopes to acclimate himself to the cold weather in the ‘Land of the Rising Sun’ during the competition.

The six-day tournament will be held from Tuesday (Nov 1) until Nov 6.-Bernama