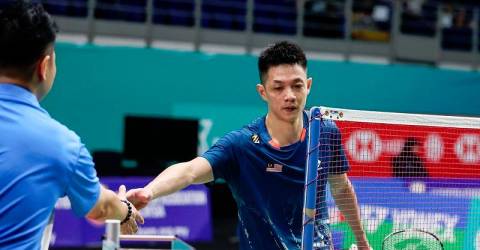 NEW DELHI: National professional men’s singles shuttler Liew Daren (pix) was forced to concede his first-round match at the India Open today after he was unable to continue due to an injury.

Nine minutes into his match against Denmark’s Hans-Kristian Vittinghus, the Malaysian had to retire while trailing 9-11 in the first game.

The Malaysian player went to the medical room after leaving the play area at the KD Jadhav Indoor Hall.

The 35-year-old had also withdrawn from the second round of the 2023 Malaysia Open last week due to an injury on the right calf.

The Danish player said he knew that the Malaysian shuttler was struggling.

“His movement (on the court) wasn’t great. He didn’t look like someone who was fully fit,” Vittinghus told Bernama after the India Open match.

There was no such luck for Malaysia’s mixed doubles pair of Goh Soon Huat-Shevon Lai Jemie when they went down 11-21, 7-21 to China’s Zheng Si Wei-Huang Ya Qiong in 28 minutes in the first round. – Bernama