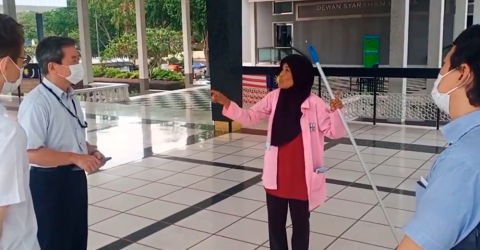 In the video, the woman, who appears to be wearing a uniform and is holding a mop, was using Japanese to explain the nuances of the Malay language to the men.

According to a Twitter user who claimed to recognise her, the woman was a mutual friend and a tour guide who spokeseveral languages.

In their reply, they said that due to the pandemic, the tourism business was badly affected and lots of freelance guides lost their job.

However, another Twitter user commented that the woman was an ex-professor from UiTM instead.

No matter which claim was correct, the fact stands that the Masjid Negara cleaner was fluent in Japanese, teaching Bahasa Melayu and conversing well with the Japanese men.

Another user added: “I’m not surprised. If I were at the tipping point of a mental breakdown, I wouldn’t have minded resigning from my professional career to work as a cleaner. Even though I’d have a lower salary, at least I wouldn’t be as stressed out.”

Someone else chimed in that they had also met another cleaner who was an ex-professor and decided to take up the job as they were bored of staying at home.