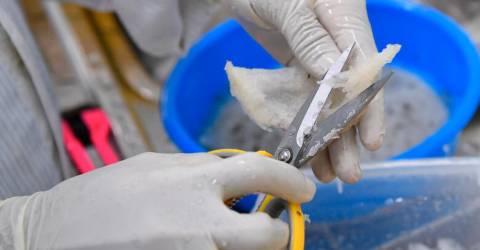 TELUPID: The Ministry of Agriculture and Food Industries (MAFI) wants more involvement of the B40 group in the swiftlet bird’s nests industry which has a great potential to contribute to the economy of the country and the local community.

Its minister Datuk Seri Dr Ronald Kiandee said, in this regard, more strategic partnerships should be forged between government departments and agencies and private companies involving the B40 community.

The Beluran Member of Parliament said that even though there were such an industry in rural areas, it has not been fully utilised by the B40 group.

“I hope this strategic partnership can be expanded and utilised by the community because the industry can help improve their economic status,” he told reporters after officiating at the Sandakan B40 Community Swiftlet House in Kampung Lumou here today.

A total of 20 participants have been selected to take part in the programme, a pilot project of Syarikat Beho Birdnest Sdn Bhd which is spearheading the efforts to help raise the income of the B40 group in Sabah.

Ronald said as of last year, a total of 13,635 swiftlet houses nationwide have registered with the Veterinary Services Department, of which 3,413 were in Sabah, while 2,143 premises, including 373 in the state, have obtained the Malaysia Good Agricultural Practices (MyGAP) certification.

“The industry exported 5,905 metric tonnes of bird’s nests last year with a value of RM1.8 billion, an increase of RM400 million from RM1.385 billion in the previous year.

“The ministry will monitor and ensure that the programme adheres to the international standard so that the bird’s nests produced through this strategic partnership can be promoted and exported abroad,” he said. — Bernama