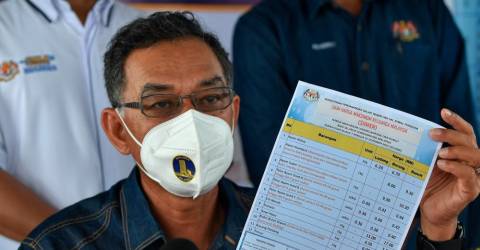 KUALA LUMPUR: The list of items in the ‘Malaysian Family Maximum Price Scheme’ (SHMKM) effective from Dec 7 to 31 will be reviewed continuously as a measure to stabilise the price of essential goods.

Domestic Trade and Consumer Affairs (KPDNHEP) Deputy Minister Datuk Rosol Wahid (pix) said the addition or reduction of items in the list which currently includes chicken, chicken eggs and some types of vegetables was done based on the current assessment of the market situation.

“Besides that, the price may vary by state because it is according to the current market price and takes into account various factors such as price changes, especially for imported goods,“ he said at the Hulu Terengganu Parliament’s #Keluarga Malaysia Sales programme press conference today.

Apart from that, Rosol said through SHMKM, the government had set the maximum price of standard chicken at RM9.30 per kilogramme for retail sales and RM8 per kg for wholesalers in the Peninsula, except Langkawi, effective Tuesday.

In the meantime, Rosol said the government was still continuing its various operations such as Ops Menu, Ops Catut, Ops Pantai and Ops Pasar 2 to ensure the stability of the price of goods in the market.

In Johor, KPDNHEP Putrajaya Deputy Director of Enforcement (Prevention) Aris Mamat said the ministry would increase cooperation with various agencies, especially the Ministry of Agriculture and Food Industries to re-stabilise the prices of daily necessities.

He said the effort was to reduce the burden on consumers who were affected by the recent increase in the prices of various essential goods, but acknowledged that the prices of vegetables, fish and poultry showed little difference across the country.

“There are also traders who have still maintained their prices, such as for imported meat, and we do not rule out the price increase factor due to more demand than supply,“ he told reporters after inspecting and surveying the price of daily necessities at the Batu Pahat Wet Market, today.

Meanwhile, Perak plans to expand the #Keluarga Malaysia Sales Programme to the whole state by adding more types of goods to enable people to buy basic necessities at a rate of 15 to 20 per cent cheaper than the market price.

“We are organising such programmes in areas where there is high traffic and is easily accessible to the public. Maybe we will have this programme in every district,“ he said when met by reporters at the #Keluarga Malaysia Sales Programme at the Rural Transformation Centre (RTC) in Gopeng, today.

In Kelantan, the #Keluarga Malaysia Sales Programme held in Lubok Jong, Pasir Mas from 8am to 1pm received an encouraging response with the attendance of about 1,000 visitors.

Kelantan KPDNHEP director Adnan Abd Rahman said among the agencies involved in the programme were the Federal Agricultural Marketing Authority (Fama), the Fisheries Development Authority of Malaysia (LKIM) as well as private companies.

“The government’s action to implement the programme with the sale of basic necessities at a rate of 15 to 20 per cent cheaper than the market price is timely and awaited by the people,“ he said when contacted by Bernama, today.

Commenting further, Adnan said the concept held this time will also be implemented throughout Kelantan, involving 14 parliamentary constituencies with a frequency of twice a month.

On Thursday, Prime Minister Datuk Seri Ismail Sabri Yaakob announced that the government would organise the #Keluarga Malaysia Sales programme in all 222 parliamentary constituencies simultaneously beginning today, to ease the burden of the people following the current price increase.

According to the prime minister at the initial stage, the programme, which offers daily necessities at between 20 and 50 per cent cheaper prices, is targeted to be held twice a month focusing on areas with large populations from the B40 and M40 groups. -Bernama