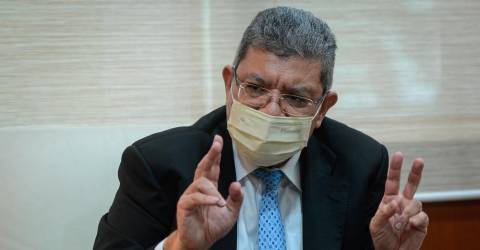 KUANTAN: The 50 Malaysians identified to be in Kazakhstan where massive street protests triggered by rising fuel prices are taking place are reported to be safe, Foreign Minister Datuk Seri Saifuddin Abdullah(pix) said.

He said Wisma Putra was monitoring developments in the country and Malaysians have been asked to contact the Malaysian embassy for further information.

“A more detailed official statement on Kazakhstan will be issued tomorrow,” he said when asked about the status of Malaysians in the country at a press conference at the Indera Mahkota parliamentary service centre here today.

The unrest in Kazakhstan unfolded on Jan 2 when thousands of its citizens began protesting a rise in fuel prices.

According to media reports, Kazakh President Kassym-Jomart Tokayev declared a two-week state of emergency on Wednesday after the protests spread nationwide.

He said Yap, who is also Gerakan vice-president and Mohd Banuri had begun duties last November.

“I believe to implement something good, we must have cooperation involving the government, the private sector and civil society, that is why I appointed a number of individuals not from the government sector as advisors because we need input from other sectors.

“These people have the experience and expertise at the international level… these two individuals also do not get any salary, allowance or any other perks,” he said.

Separately, Saifuddin, who is also Indera Mahkota MP, said some 3,400 flood victims in Indera Mahkota had been given appropriate assistance including prepared meals, snacks and electrical appliances besides allocation to repair roofs and ceilings. –Bernama