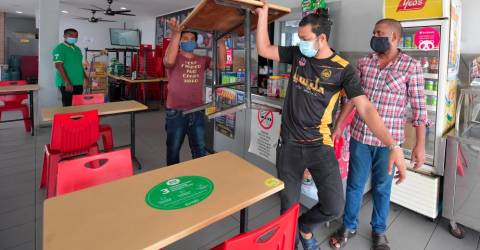 KUALA LUMPUR: The lack of workers is causing many business premises including restaurants from operating 24 hours despite being able to do so after the country entered the transition to endemic phase last Friday.

A Bernama observation around the federal capital found many ‘Mamak’ (Indian Muslim) restaurants operators which are popular hangout spots after midnight are only comfortable maintaining their operation up to 2 am. Malaysian Muslim Restaurant Owners Association (Presma) president, Datuk Jawahar Ali Taib Khan said the situation is due to many Mamak restaurants not having enough workers to accommodate the operation despite a high demand more so during Ramadan.

He said currently only 25 per cent of the 9.000 Presma members nationwide are able to operate 24 hours.

“The demand is there, more so during fasting month for sahur (pre-dawn meal) and so on, but many workers have returned to their countries of origin during the Movement Control Order before this,” he told Bernama here today.

Jawahar said various initiatives have been implemented by the association including joint programmes with the government to attract locals to work in Mamak restaurants but it has not solved the problem.

In this regard, he appealed to the government to help lighten the burden of 24-hour restaurant operators by facilitating the entry of foreign workers into the country.

“Even though the demand is high, we just don’t have the workers for our business. Imagine looking at the opportunities before us but we are unable to seize it,” said Jawahar.

Sharing the same view is Ampang branch Pelita Nasi Kandar Restaurant manager, Hassan Mohideen who said they have many customers but we are short of workers so we tried to give our best service.

“Despite the lack of workers, we are able to cope with the increased business volume since the start of Ramadan, but after this we do not know,” said Hassan.

Meanwhile, the manager of a convenience store in Setapak, Salmah Said said her branch is still unable to operate 24 hours due to the shortage of workers.

“So far we are only operating from 6 am to 12 midnight and the issue has been brought to the management and they are looking at the problem,” he said. — Bernama