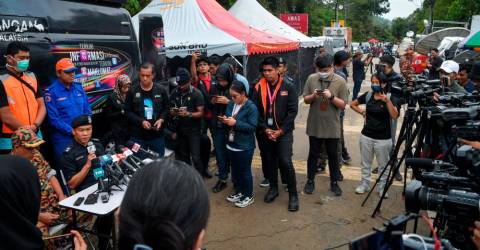 PUTRAJAYA: The Communications and Multimedia Commission (MCMC) will streamline the existing standard operating procedures (SOP) for telecommunication access by holding discussions with the stakeholders.

In a statement, the Commission said as a result of its immediate action, all telecommunication service providers have achieved a good quality of cellular coverage that exceeds 50Mbps in the area of the landslide tragedy in Batang Kali, Selangor, last Friday.

“The MCMC, along with the service providers, will continue to monitor the quality of service in the area to be at the best level to facilitate the search and rescue (SAR) operations and to enable media practitioners to disseminate the latest information on the tragedy to the public,” it said.

Prior to this, Minister of Communications and Digital Fahmi Fadzil wanted the Commission and service providers to expedite the streamlining of the SOP, especially with the specific need for SAR operations in disaster areas.

Last Friday, a landslide occurred in Batang Kali, Selangor, which claimed 24 lives out of the 94 victims involved.

Among the MCMC’s actions was mobilising the Emergency Disaster and Response Team (EDRT) on Dec 16, by instructing the main service providers namely Telekom Malaysia (TM), Celcom, Digi, Maxis and U-Mobile to immediately analyse and mobilise their communication assets to the location of the incident.

“MCMC has also asked for assistance from a non-governmental organisation, Malaysian Amateur Radio Emergency Service (MARES) to provide alternative communication by using amateur radio technology to be used by rescuers to communicate quickly.

“They had arrived earlier that day at the scene to help other agencies rescue the victims,” it said.

The MCMC also stated that TM has also provided a free Unifi wifi service with a speed of 800 Megabits per second (Mbps) in the Malaysian Armed Forces, Civil Defense Forces, Malaysian Fire and Rescue Department and the Royal Malaysia Police tents.

“A similar access point has also been placed in the Information Department (JAPEN) truck as the media coordinator,” it said.

The Commission said that among the challenges faced by telecommunication network providers in providing services at the location of the tragedy was the lack of electricity, the hilly terrain and the distance of the service provider’s transmitters which caused technology such as microwaves to be unable to be used due to the absence of Line Of Sight (LOS).

“TM has immediately prepared an alternative action by pulling and providing a 2km fibre optic cable from the Awana Genting Node and the provision of TM’s MoVIC (mobile IP cell) at the disaster site.

“This allows the Multi-Operator Core Network (MOCN) technology to be used by service providers and provide coverage for their respective networks,” it added.-Bernama