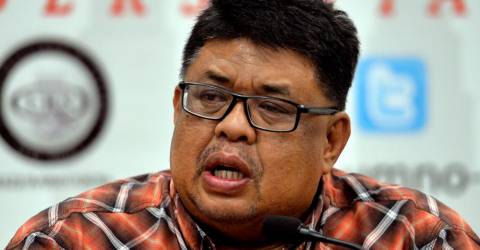 ALOR GAJAH: Melaka Umno is confident the cooperation between the party with PAS under the Muafakat Nasional (MN) umbrella would benefit both parties.

In welcoming the decision of Umno Supreme Council, Melaka Umno liaison committee chairman Datuk Seri Ab Rauf Yusoh (pix) said it was among the matters which has long been awaited by the grassroots.

“I could see the grassroots are very happy since last night as they have long been waiting for the statement which gives hope to all supporters so that the cooperation could be translated in the state election on Nov 20.

“However, it is up to PAS to look at the offer made so that it would be advantageous to both,” he told reporters at a media conference here today.

Umno yesterday decided to continue the cooperation with PAS for the Melaka state election.

Umno secretary-general Datuk Seri Ahmad Maslan was quoted as saying that the stand was in line with the resolutions of the party’s General Assembly last year, which among others was to strengthen MN which was formed between the two parties.

Commenting on the statement of Umno president Datuk Seri Dr Ahmad Zahid Hamidi on new faces in the state election, Ab Rauf said it would leave it to the top leadership to decide.

Melaka PAS commissioner Datuk Kamarudin Sidek via WhatsApp told Bernama, the party welcomed the decision of the UMNO and it was waiting for a response from the central leadership on the latest development.

The Election Commission (EC) has set polling day for Melaka state election on Nov 20 while nomination day would be on Nov 8 and early polling on Nov 16.

The Melaka state election was held following the dissolution of Melaka State Legislative Assembly on Oct 4 when four assemblymen withdrew their support for the leadership of Chief Minister Datuk Seri Sulaiman Md Ali.