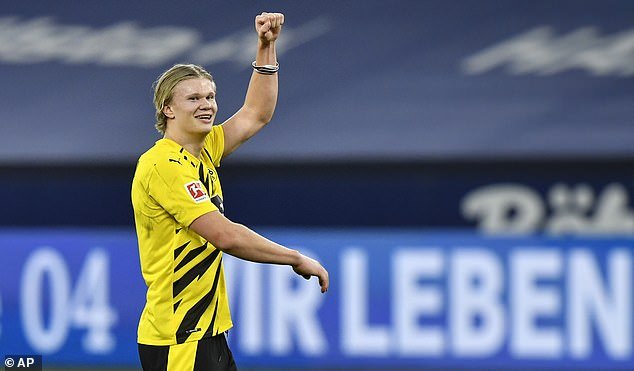 Mino Raiola reveals FOUR Premier League clubs can afford to sign Erling Haaland and give him the platform he wants as he insists the sought-after Borussia Dortmund striker is like the Lewis Hamilton of football!

Mino Raiola has revealed that four Premier League clubs can sign Borussia Dortmund striker Erling Haaland and insisted that the sought-after star is like the Lewis Hamilton of football.

Real Madrid and Manchester United are two of the clubs who have been regularly linked with the 20-year-old since missing out on him last January.

Haaland has been touted for a mega-money move this summer despite Dortmund’s desperate hopes of clinging on to him for another season, and Raiola has revealed that he a number of Premier League clubs are in the race to sign him.

‘It is obvious that everybody is looking at Erling as one of those potential new future stars because it’s so difficult to do what he does at his age at his level,’ he told the BBC.

‘He will be one of the future stars of the next decade because we see that stars such as Ibrahimovic, Ronaldo and Messi are coming to an age where everyone asks themselves: ‘How long can we still enjoy them?’ So everyone is looking for the new generation.

‘Only a maximum of 10 clubs can afford to buy [Haaland] and give the platform you would like after you’ve been in Dortmund… and four of those clubs are in [England].

‘I don’t think there’s a sports director or trainer in the world who would say ‘not interested’. It’s like saying: ‘Is there a Formula 1 team who would not be interested in having Lewis Hamilton?”