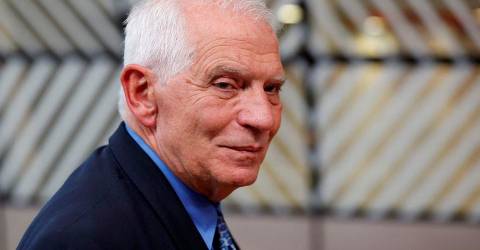 BRUSSELS: European Union countries should work together in replenishing their military inventories and avoid competing with each other amid ongoing arms deliveries to Ukraine, the bloc’s top diplomat said on Tuesday.

The EU has long urged member states to join forces on arms purchases instead of driving up prices by competing against each other or striking deals individually with suppliers outside the bloc. But countries have been reluctant to heed the advice.

“All together makes better prices, better quality and better time,“ EU foreign policy chief Josep Borrell told reporters as he arrived for a meeting of the bloc’s defence ministers.

The 27 member states are set to boost military budgets by up to 70 billion euros ($72.2 billion) in total by 2025 but a lack of project cooperation and the purchases outside the bloc

It identified several critical gaps EU countries should work together to fill, such as long-distance air transport, aircraft carriers and tankers to provide fuel for war ships and high-end air defence systems.

Only 18% of all investment in defence programmes involves cooperation between member states, the EDA said, adding that investing in European projects was often seen as more time-consuming and complex.

Created in 2004, EDA’s main task is to support and facilitate defence cooperation in Europe.

Germany said on Tuesday it would establish a maintenance hub in Slovakia to service and repair weapons it has delivered to Ukraine as it battles against invading Russian forces.

“We have reached agreement, and work can start immediately so that all the equipment which has been supplied can be repaired after coming out of battle,“ Defence Minister Christine Lambrecht told reporters in Brussels.

EU defence ministers will also discuss replenishing the so-called European Peace Facility, which member states have tapped to fund arms and equipment purchases for Kyiv and which has been largely depleted over almost nine months of war in Ukraine.

In total, the EU and its member states have provided arms and military equipment worth at least eight billion euros ($8.27 billion) to Ukraine so far, Borrell said on Monday, adding this was about 45% of what the United States had supplied to Kyiv. ($1 = 0.9696 euros) – Reuters