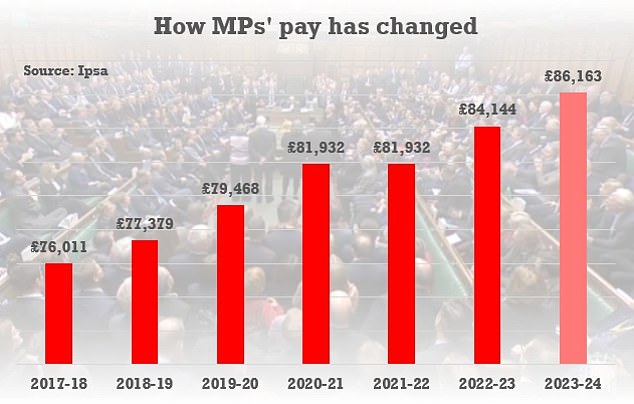 MPs are on track for a 2.4% pay rise next year as Rishi Sunak warns striking unions over ‘unreasonable and unaffordable’ demands to match soaring inflation

MPs look set for a 2.4 per cent pay rise in the spring as ministers urge striking unions against trying to match soaring inflation.

Pay for politicians is linked to figures for public sector earnings that will be published over the next fortnight.

But it is expected to be close to the most recent level released earlier this month – 2.4 per cent. That would take salaries from £84,144 to £86,163 in April, with peers likely to see their tax-free daily ‘attendance allowance’ increase by the same proportion, to £340.

Ipsa will not confirm the pay increase for MPs until the New Year, and does have wriggle room to adjust the level.

The figure emerged amid a wave of public sector strikes as unions demand eye-watering rises. The RMT has said that pay should be in line with inflation – currently running at 10.1 per cent – and nurses have called for even more.

However, Rishi Sunak said at PMQs today that the push was ‘unreasonable and unaffordable’.

‘I have nothing but admiration and gratitude to our nurses for all the work they do,’ he said.

‘But it is simply unreasonable and unaffordable to have a 19 per cent pay rise.’

Ipsa was given control of politicians’ salaries after the credit crunch, and the watchdog has linked increases to a specific metric on changes in average public sector earnings for October. That figure will be released by the ONS in a fortnight

Ipsa was given control of politicians’ salaries after the credit crunch, and the watchdog has linked increases to a specific metric on changes in average public sector earnings for October.

The Office for National Statistics revealed recently that the level for September was 2.4 per cent, and the October figure will be released in a fortnight.

The House of Lords has committed to following the uprating used by the Commons. That could see the daily allowance for peers – who do not usually receive a salary – go up from £332 to £340.

Health Secretary Steve Barclay today reiterated that unions’ pay demands are ‘not affordable’, after Unison announced that ambulance workers across England are set to strike before Christmas after voting in favour of industrial action over pay and staffing levels.

Mr Barclay said: ‘I’m hugely grateful for the hard work and dedication of NHS staff and deeply regret some will be taking industrial action – which is in nobody’s best interests as we approach a challenging winter. Our economic circumstances mean unions’ demands are not affordable, each additional 1 per cent pay rise for all staff on the Agenda for Change contract would cost around £700million a year.

‘We’ve prioritised the NHS with record funding and accepted the independent pay review body recommendations in full to give over one million NHS workers a pay rise of at least £1,400 this year, with those on the lowest salaries receiving an increase of up to 9.3 per cent.

‘This is on top of 3 per cent last year when public sector pay was frozen and wider government support with the cost of living.’

‘Our priority is keeping patients safe during any strikes and the NHS has tried and tested plans to minimise disruption and ensure emergency services continue to operate.

‘My door remains open to discuss with the unions ways we can make the NHS a better place to work.’ 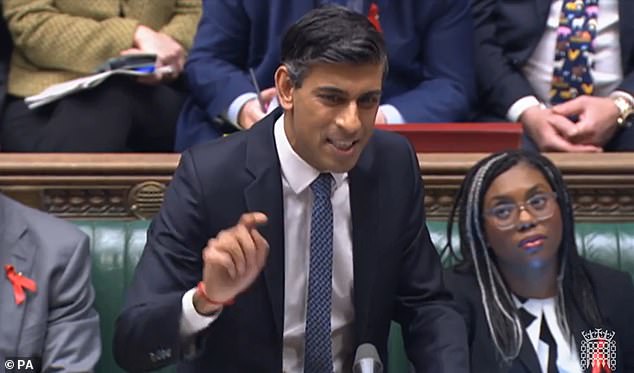