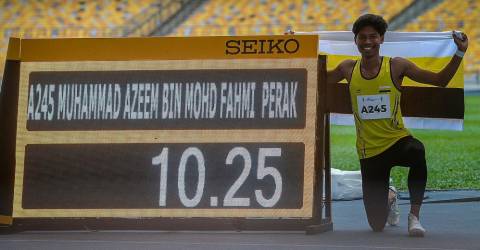 KUALA LUMPUR: Muhammad Azeem Mohd Fahmi and Nor Sarah Adi celebrated Malaysia Day in style as they were crowned sprint king and queen of the 20th Malaysia Games (Sukma) after dominating the 100 metre (m) finals yesterday.

National 100m record holder Muhammad Azeem won the gold for Perak with a time of 10.25 seconds(s), beating fellow national teammates Muhammad Arsyad Md Saat and Muhammad Haiqal Hanafi , who had to settle for the silver and bronze respectively.

Muhammad Arsyad, representing Johor, clocked a time of 10.46s while Muhammad Haiqal from Negeri Sembilan came in at 10.50s.

Meanwhile, Pahang sprinter Nor Sarah Adi won the gold in the women’s 100m as expected with a time of 11.91s, overcoming Sabahan Nur Aishah Rofina Aling (silver) at 12.08s and Nur Afrina Batrisyia Mohamad Rizal from Selangor (bronze) at 12.10s.

His win comes a day after he won the first gold for Pahang in the men’s 10,000m, but he faced some disappointment when his time was not acknowledged as a new games record due to the conditions set by the National Sports Council.

The Johor contingent are currently on top of the medal tally table, with 15 gold, earning two from athletics, three from wushu and one from karate yesterday.

Malacca is second with nine gold, while the five gold medals won by Sabah yesterday has propelled the state to third place with a total of seven gold.

Yesterday marked the end of the wushu competition, with 25 golds having been won during three days filled with drama and sporting heroics.

Archery, sepak takraw and artistic gymnastics events are set to begin tomorrow, with 19 gold up for grabs. – Bernama