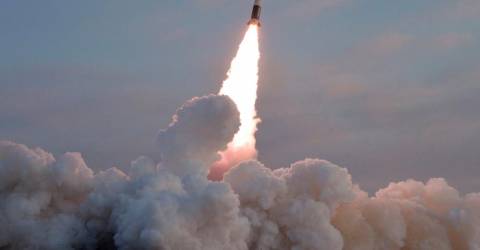 SEOUL: North Korea fired a ballistic missile toward the sea off its east coast on Thursday, South Korean and Japanese militaries said, as the isolated country races to advance its weapons programmes.

The launch is the North’s 16th known weapons test this year, and came hours after reporting its first coronavirus outbreak, declaring “gravest national emergency” and ordering a national lockdown.

South Korea’s Joint Chiefs of Staff reported the latest test but no other details, and Japan’s coast guard also said a projectile believed to be a ballistic missile has fallen outside its territorial waters.

In its last weapons test on Saturday, the North used a submarine-launched ballistic missile, which it has been aggressively developing in recent years.

U.S. and South Korean officials have said Pyongyang’s first nuclear test since 2017 could take place as early as this month. — Reuters