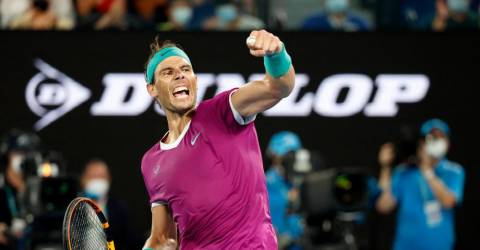 MELBOURNE: Sixth seed Rafa Nadal dropped his first set at this year’s Australian Open but still powered through to the fourth round with a 6-3 6-2 3-6 6-1 defeat of Karen Khachanov on Friday.

The Spaniard, seeking to claim a record 21st Grand Slam title in the absence of great rivals Roger Federer and Novak Djokovic, was sensational as he took a two-set lead.

But Khachanov, seeded 28th, threw caution to the wind in the third set, stalling Nadal’s charge with some ferocious hitting.

Nadal seized back control with a break of serve at the start of the fourth and with the clock having ticked past midnight he finished off the match in a hurry. – Reuters