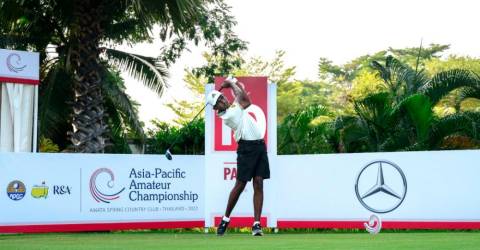 CHONBURI (Thailand): For Malaysia’s Nateeshvar Anatha Ganesh, having to miss spending Deepavali with his family two years in a row to play in the Asia-Pacific Amateur Championship (AAC), is worth the sacrifice.

The 17-year-old golfer from Malacca tees up in this week’s 13th edition of the AAC at Amata Spring Country Club as part of a record seven-strong Malaysian contingent. The Hindu festival of Deepavali took place on Monday when Nateeshvar was on a flight in from Kuala Lumpur.

“It is kind of sad having to miss Deepavali at home, but I have the chance to play in the AAC twice which is a huge thing for me. It’s a great experience,” said Nateeshvar, who is a Form 5 student at St Francis Institution in Malacca.

“The best amateurs from the region are here, so it’s going to be fun competing with all of them,” he added.

In last year’s AAC at Dubai Creek Golf & Yacht Club, Nateeshvar failed to make it to the weekend after rounds of 79 and 78. While he has not set any targets at Amata Spring, the talented young golfer aims to do his best.

“I’m just going to try my best and go all out. I don’t want to put too much pressure on myself, just do what I can do, try my best and enjoy the experience,” noted Nateeshvar, who won the Menpora Pagi Junior Amateur Open in Indonesia in July.

Having played a practice round this morning, Nateeshvar rates both Amata Spring and Dubai Creek as among the best courses he has played so far.

“Both Amata Spring and Dubai Creek are great golf courses. They’re pure, the fairways are perfect and the greens are superb – I’ve never played any golf courses in Malaysia like these,” said Nateeshvar, who competed in the Junior Players Championship at the famed Players Stadium Course of TPC Sawgrass in Florida early last month and finished 64th.

“Amata Spring is a new experience for me. I think the main challenge here is the wind as we don’t get these kinds of conditions back home. I’ll just focus on hitting fairways and greens, and hope to make some putts,” noted the slim teenager.

Nateeshvar and Marcus were both members of the gold medal-winning Malaysian team at the Southeast Asian (SEA) Games in Vietnam earlier this year.

“Playing in the SEA Games was one of my biggest dreams since I was young. I consider it to be one of the best moments of my life,” noted Nateeshvar.

“The tournament also created a strong bond amongst our team. Marcus is one of my close friends and we text each other a lot. I’ve known him for around five years and we’ve played a number of tournaments together.”

The best finish by a Malaysian in the AAC is seventh by Mohd Iszaimi Ismail during the inaugural event in 2009 at Mission Hills Golf Club in China, matched by Ervin Chang in 2018 at Sentosa Golf Club in Singapore.