Nicola Sturgeon has admitted she ‘got overexcited’ after she was filmed celebrating wildly when the Scottish National Party claimed the Westminster seat of Liberal Democrat leader Jo Swinson.

The Remain Alliance was clearly not as steadfast as Ms Swinson may have hoped.

Ms Sturgeon was filmed reacting to the Dunbartonshire East result while doing interviews at the Glasgow count, but has faced fierce criticism over her behaviour.

She has now apologised, saying: ‘Sorry, I got overexcited.’ Speaking to Sky News, she said it was an ‘understandably, excited reaction’ – and offered Ms Swinson her sympathy.

‘I understand more than most, the pressures and the challenges of leadership and to lose her seat tonight when she’s lead her party through this campaign will be a bitter blow for her,’ she said. 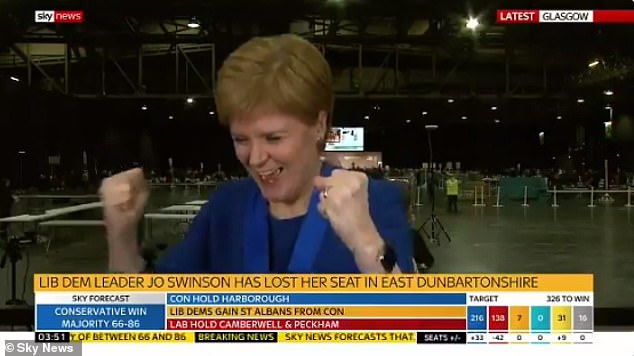 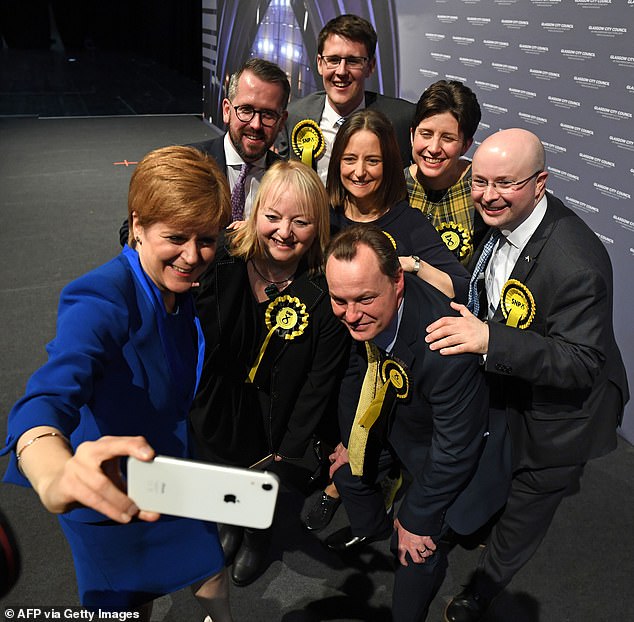 Among those criticising her behaviour was Brexit Party leader Nigel Farage who said it was ‘graceless and nasty’, while Lib Dem MP Layla Moran, who held on to Oxford West and Abingdon, said: ‘This is so unacceptably ungracious.’

Ms Sturgeon has claimed the surging SNP now has a fresh mandate for holding a second referendum on Scottish independence as she celebrated ousting Miss Swinson.

Miss Swinson lost her East Dunbartonshire seat to the SNP’s Amy Callaghan by just 149 votes, sparking an on-air outburst from the Scottish First Minister who raised both of her fists in the air and shouted for joy.

The narrow SNP victory was one of more than a dozen gains for the party as it jumped from 35 seats at the 2017 general election to 48 this time around out of a total of 59 Scottish constituencies.

Ms Sturgeon has repeatedly demanded a second vote on splitting from the UK after the first one was unsuccessful in 2014 and she has said it must take place before the end of next year.

She seized on her party’s strong showing at the ballot box yesterday as evidence that she now has an undeniable case for holding another national ballot. 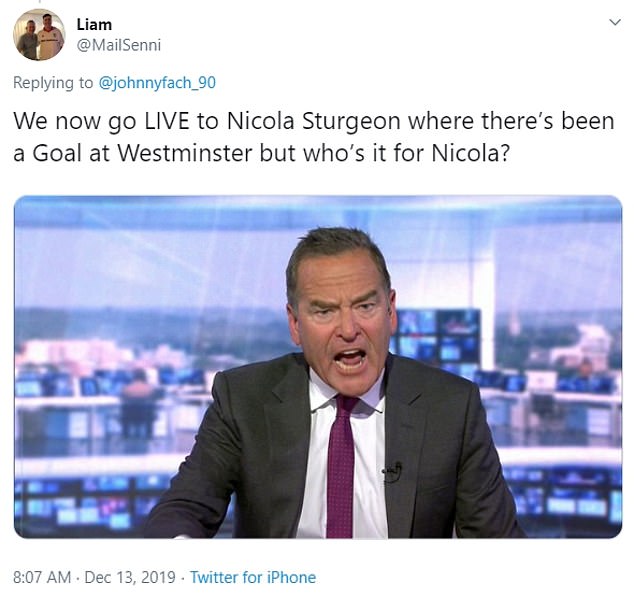 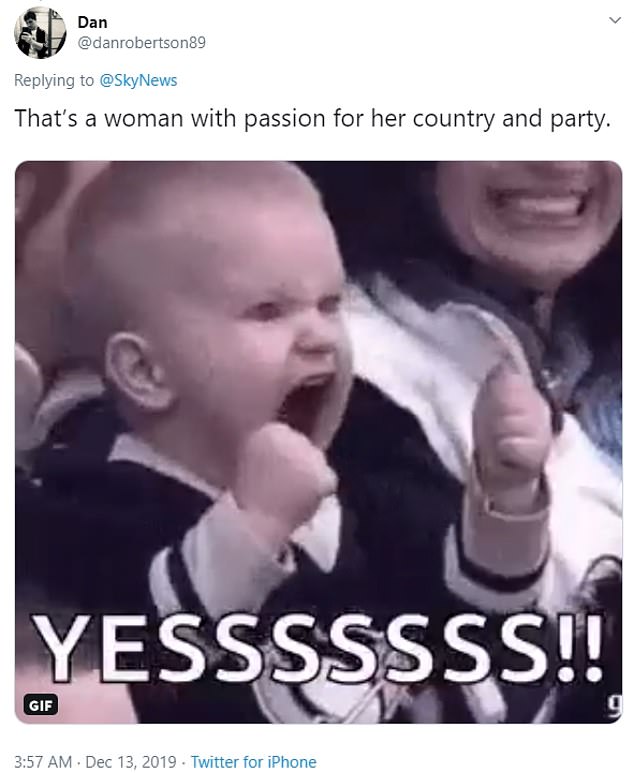 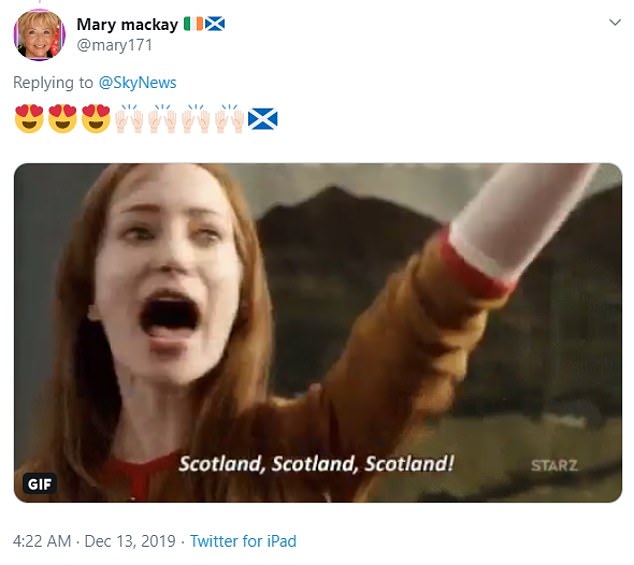 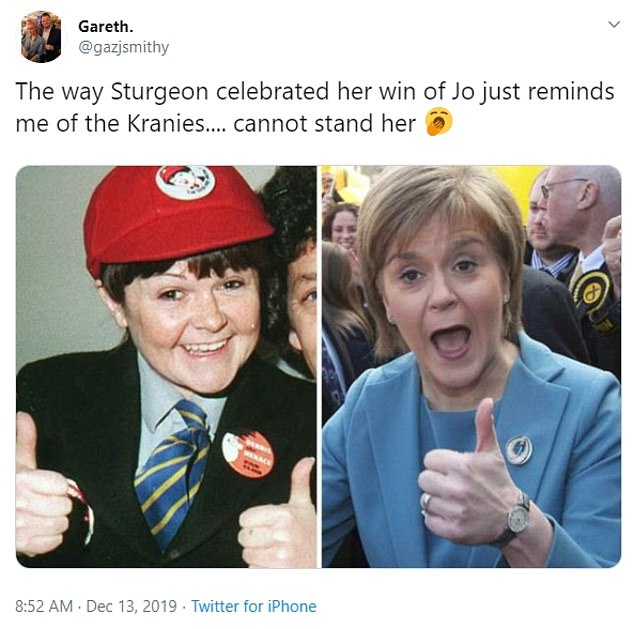 However, the SNP secured 45 per cent of the vote north of the border with a majority of Scots actually voting for unionist parties.

Boris Johnson, who finished the election with an 80 seat Tory majority, has ruled out allowing another Scottish independence referendum.

And senior Tory Cabinet minister Michael Gove heavily hinted in the wake of the election results that the Conservative government will not sign off on another breakaway poll.

That sets up what is likely to be a furious constitutional row in the coming months as the Tories and SNP each try to get their way on the issue. 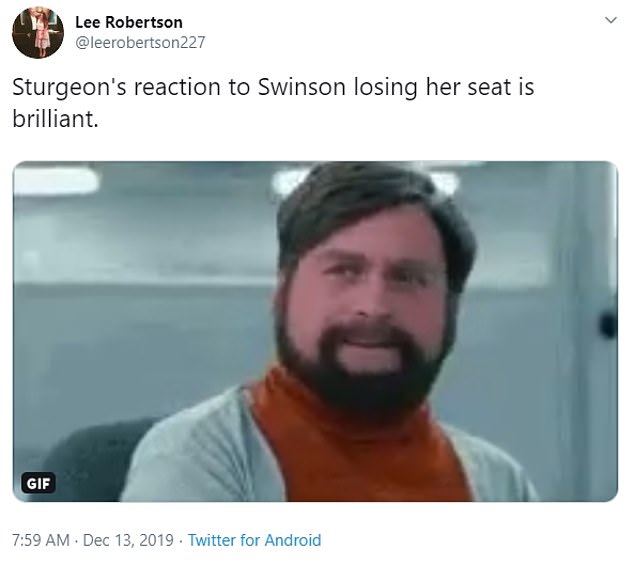 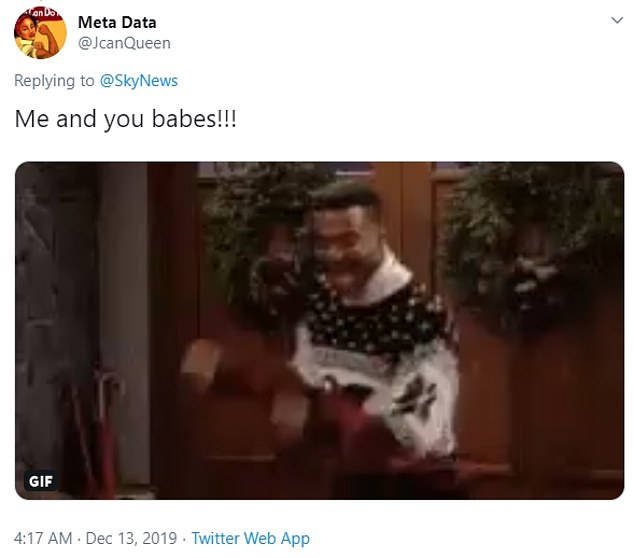 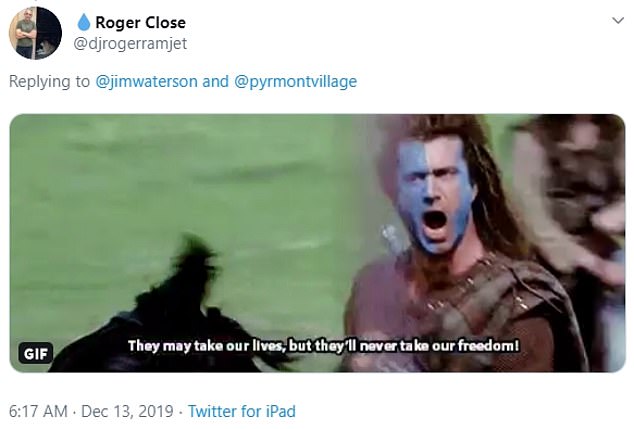 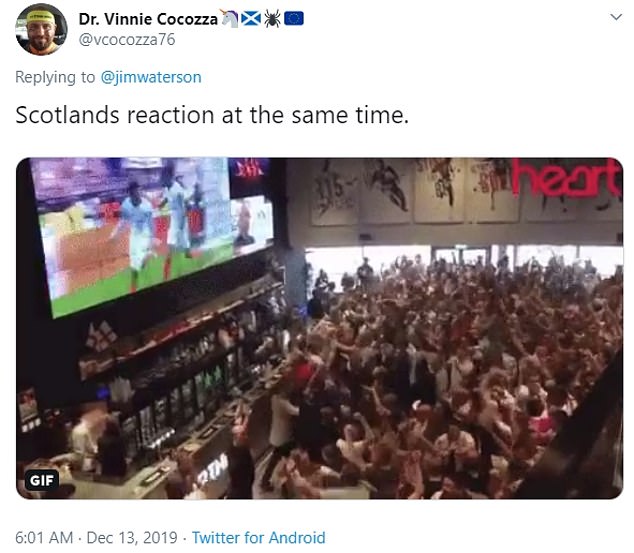 The 66-year-old Labour MP was at the count for Hackney South and Shoreditch in East London shortly before 4am when she found out that Ms Swinson had been given the boot by voters.

An aide was heard saying: ‘Jo Swinson’s lost her seat’. Ms Abbott then asked: ‘Who lost their seat?’, and the aide replied: ‘Swinson’. Ms Abbott elatedly whispered: ‘Yes, get in.’

Ms Sturgeon told the BBC: ‘There is a mandate now to offer the people of Scotland a chance to decide their own future…. there is a clear desire that Scotland should not be landed with a Boris Johnson government and ripped out of Europe against our will.’ 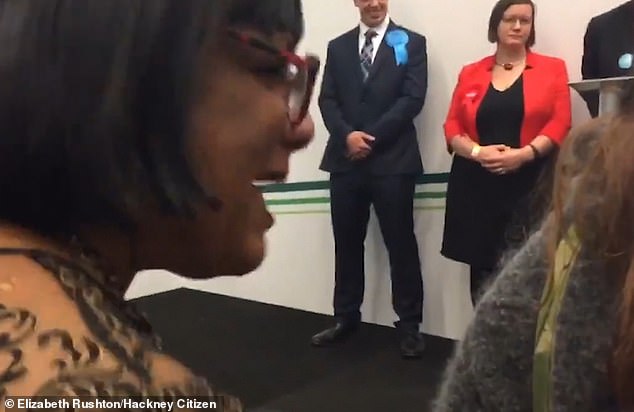 She said Mr Johnson ’emphatically does not have a mandate’ to take Scotland out of the EU.

Speaking on Sky News, she said: ‘I’m bitterly disappointed at the result UK wide, I think Tory governments are bad for the UK, more than they’re bad for Scotland, and I really don’t want the UK to leave the European Union.

‘And Scotland must have the choice over our own future because it can’t be any clearer than it has been made in this election today that Scotland doesn’t want a five year Boris Johnson government and doesn’t want to lose our status as a European nation.’ 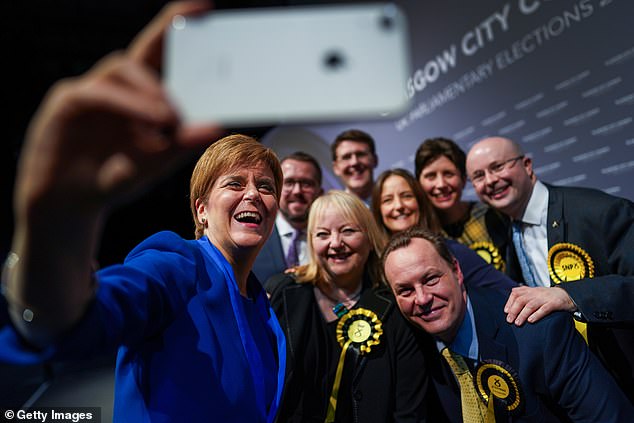 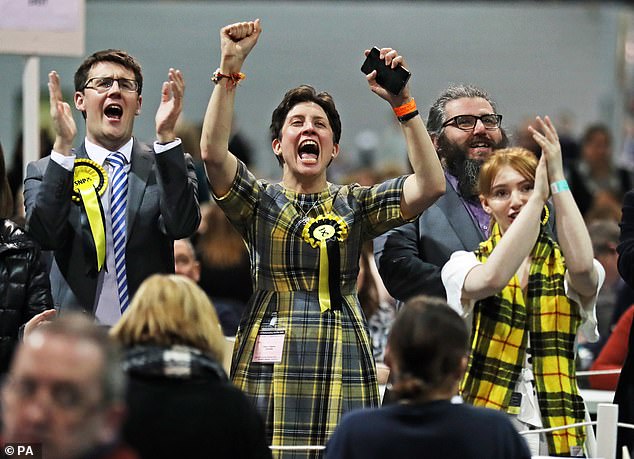 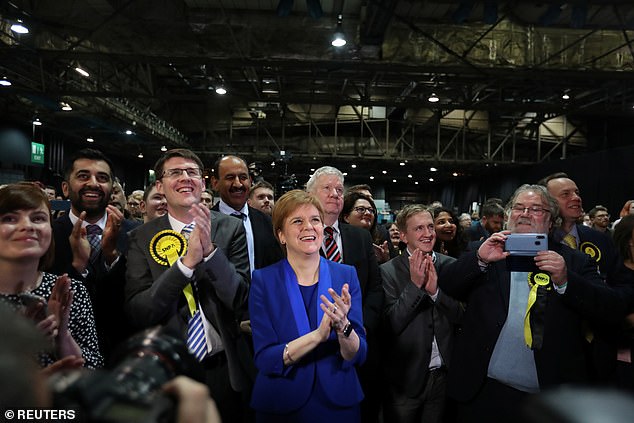 If the SNP was to win 55 of the 59 Scottish seats up for grabs, it would be the party’s second best ever result – and only one fewer MP than they secured in 2015, when they won all but three seats north of the border 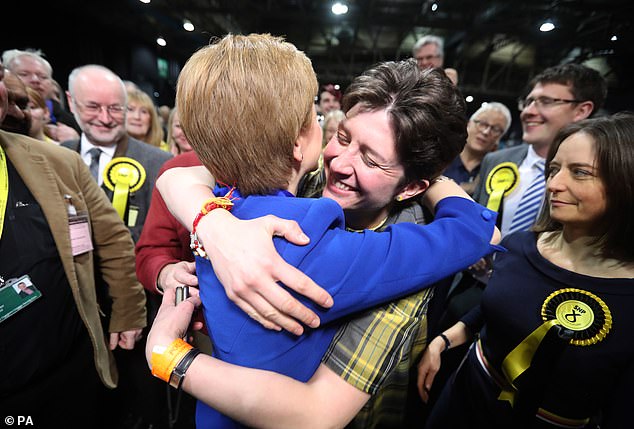 But Tory minister Mr Gove argued there would not necessarily be a second referendum based on the election results.

‘I don’t believe that another independence referendum is inevitable, quite the opposite,’ he told ITV.

‘I don’t believe that a second independence referendum would be right for Scotland or right for the United Kingdom.’

Ms Sturgeon added that on a personal level, she ‘feels for’ Liberal Democrat leader Ms Swinson after she was booted out by the SNP.

Ms Swinson suffered a disastrous night as she lost her seat and stepped down as leader.

Meanwhile, her party was on course to finish with 11 MPs – one less than the Lib Dems managed in 2017.