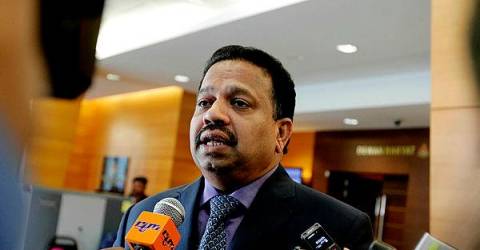 He said Sunther, who is the son of former MIC deputy president Datuk Seri Dr S. Subramaniam, had met and informed him of Warisan’s invitation to join the party.

“I have no objections for him to continue his political career in Warisan. In fact, I thank him for taking the time to meet me.

“…we met for about half an hour and I wished him all the best in charting his political career in Warisan,” he told reporters after the party’s Maju Institute of Education Development (MIED) cheque presentation ceremony, here, today.

On Jan 12, the media reported that Sunther had joined Warisan and will contest under the party’s banner in the next general election, with Sunther also saying that he strongly believes in its vision and direction.

Vigneswaran, who is also Malaysia’s special envoy to South Asia, said India has the largest rescue team that was recognised by the United Nations as the country constantly faced natural disasters.

Besides this, efforts to strengthen bilateral relations between both countries were also discussed.

“As for my role, it is on how we can further strengthen business infrastructure that will be able to lead to more investments for Malaysia and the various fields our companies can venture into in India,” he said.

On the event today, Vigneswaran, who is also MIED chairman, said some 230 students were recipients of scholarships and study loans amounting to over RM2.6 million. -Bernama