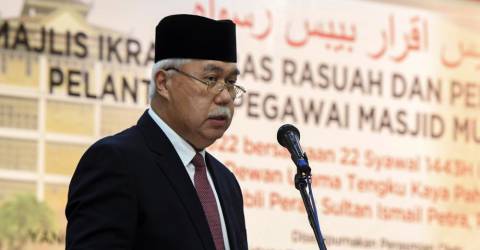 Tengku Mohamad Rizam who is also Tengku Temenggong of Kelantan said MAIK always emphasised transparency in any activities carried out to prevent leakages in its financial management.

“We are trying to apply to the staff about the symptoms of corruption, including imams, bilals and so on, to give confidence to the congregations in the mosque.

“We also mentioned this matter (symptoms of corruption) in the Friday sermon to remind everyone. Alhamdulillah, thus far we have not received any reports on mosque officials and others involved in corrupt activities,” he said.

He said this at a press conference at the Corruption-Free Pledge (IBR) and the presentation of letters of appointment to mukim mosque officials ceremony at the Sultan Ismail Petra Silver Jubilee Islamic Complex, here today which was also attended by Kelantan Malaysian Anti-Corruption Commission (MACC) director Rosli Husain.

Commenting further on the corruption-free pledge, Tengku Mohamad Rizam said that in the first series held today, a total of 600 staff and mosque officials under the supervision of MAIK have signed the pledge.

“It is part of MAIK’s commitment to supporting and upholding the principles of trust and integrity in service.

“This corruption-free pledge will involve three series of implementation, to be held in stages, involving nearly 1,800 MAIK staff as part of our efforts in combating corruption,” he said.