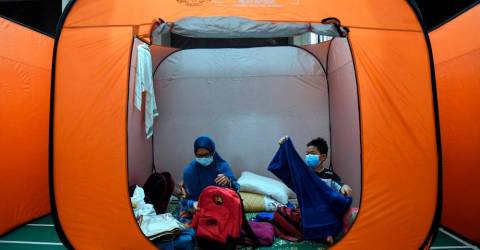 KUALA LUMPUR: The flood situation in several affected states is improving as the number of flood victims in three states has reduced as of this evening.

In Johor, State Health and Environment Committee chairman R. Vidyananthan said the number of victims placed at 50 relief centres as of 4pm was 3,770 people from 1,069 families, down from 3,872 individuals from 1,090 families recorded in the morning.

He said four districts were still affected by the floods, with Segamat still recording the highest number of victims at 1,809, followed by Muar (1,182), Tangkak (705) and Batu Pahat (74).

In Malacca State Malaysian Civil Defence Force (APM) director Lt Col (PA) Cuthbert John Martin Quadra said the number of flood victims had dropped to 369 people from 99 families this afternoon compared to 389 people (105 families) this morning, with all of them placed in 3 relief centres in Jasin.

In Pahang, the State Disaster Management Committee Secretariat informed that as of 4pm today, the number of flood victims had decreased to 364 people at 10 relief centres from 493 individuals at 11 centres recorded this morning.

Meanwhile, the publicinfobanjir.water.gov.my website reported that the water level in Sungai Kundang at the Sungai Kundang Bridge in Maran, Sungai Dong in Kampung Peruas (Raub) and Sungai Triang in Taman Agropolitan Chemomoi (Bentong) remained above the alert level as of this afternoon.