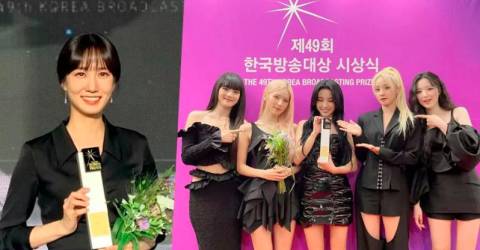 THE 49th Korea Broadcasting Awards were held at KBS TV Open Hall in Yeongdeungpo-gu, Seoul on the afternoon of September 5th, with actress Kim So-Hyun, who won Best Actress last year, stepped on stage as an award presenter.

While still riding the wave of success of Extraordinary Attorney Woo, Park Eun-bin, who led KBS2’s drama The King’s Affection, was announced as the winner of Best Actress.

Delivering her acceptance speech, Park Eun-bin said: “The King’s Affection was a dream that gave me the chance to live as a king in the Joseon Dynasty and is both a character and project that I will remember and preciously cherish in the future.”

The late Song Hae also received the judge’s special award by unanimous vote. Before passing away in June, the veteran emcee had hosted KBS’s National Singing Contest since 1988 for 34 years.

The other winners also included the MBC series The Red Sleeve, which won for Best Drama and Best Video Graphics. Jun Hyun Moo, MBC’s The Manager won Best Variety Star, while the award for Best Singer went to (G)I-DLE from MBC’s Music Core.