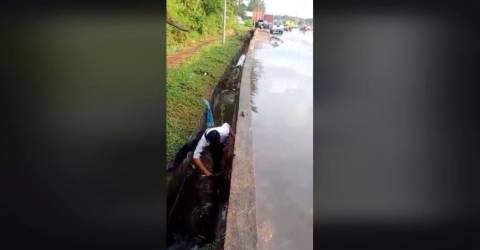 BACK in 2019, a video went viral showing a traffic cop in Kuala Lumpur going the extra mile while on duty. The officer, in full uniform, was seen going down on his hands and knees to remove debris from a drain that was causing flooding along Jalan Raja Chulan.

Now, another officer has been recorded doing the same thing, this time in the district of Penampang, Sabah.

In a video shared to the Penampang district police Facebook page, the officer, identified as Corporal Shah Erman, was shown crouched down inside a storm drain and using both his hands and a long stick to remove debris from a drainpipe by the side of a busy road.

A recent rainstorm had caused water to fill up half the road, as the clogged pipe was preventing it from draining away, and causing vehicles to slow down.

In order to ease the traffic situation, the plucky corporal took it upon himself to clear out the drain, and by the end of the two-and-a-half minute-long video, his efforts were successful when water began to let out from the pipe.

Netizens responded positively to the video, praising the officer for going above and beyond the call of duty, and for his civicmindedness.

Thank you, Corporal Shah Erman, for your service and for setting an example for the community!