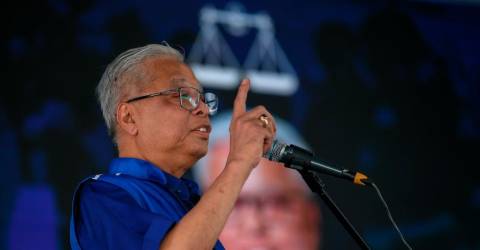 Ismail Sabri, who is also MA63 Special Committee chairman, said the effort was to ensure that every agreement enshrined in MA63 could be fulfilled to bring about significant changes, including in Sabah.

He said many things had been achieved through the MA63 Special Committee, including petroleum cash payments from Petronas and sales tax on petroleum products to the state worth almost RM5 billion.

“I am the chairman of the (special committee), which meets every month with Sabah represented by the Chief Minister (Datuk Seri Hajiji Noor). I have given the commitment to resolve all outstanding matters in MA63 in stages.

“This is the commitment of the Federal Government, and I believe with what we are giving through MA63, Insya-Allah, big changes will take place in Sabah,” he said in his speech at a meet and greet programme with the people of Libaran at the Gum Gum People’s Housing Project here today.

Speaking to reporters after the event, Ismail Sabri said he holds a meeting with Hajiji and Sarawak Premier Tan Sri Abang Johari Tun Openg every month to discuss unresolved issues related to MA63.

“Every month, we will make a checklist of things that have not been resolved yet.

“We have also discussed plans on Sabah’s future in terms of creating a company on the production of petroleum so that Sabah can also own equity holdings related to the sale of oil,” he said.

When asked about the time frame for resolving outstanding matters in the agreement, Ismail Sabri said the government did not have a specific target but would try its best to do it as quickly as possible.

In the meantime, Ismail Sabri said the BN-led government would continue to give priority to developing Sabah, which can be seen through the RM6.3 billion allocation for the state in Budget 2023, the highest allocation in Malaysia.

He said the allocation was the federal government’s commitment, among others, to improve the rural road infrastructure, upgrade dilapidated schools and rural clinics and speed up the development of broadband infrastructure in Sabah through the National Digital Network Plan (JENDELA).

“We will ensure that the issue of dilapidated schools and rural clinics (in Sabah) is resolved. In addition, we aim to resolve (internet coverage issue) and achieve 100 per cent of 4G internet coverage in Sabah within two years,” he said. – Bernama