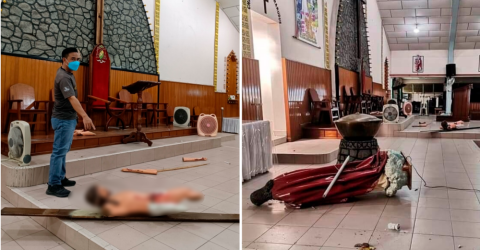 According to a report by NST, Keningau district police chief Deputy Superintendent Nor Rafidah Kasim said they received a police report about the incident about 10am.

The report stated that an intruder entered the church and damaged two religious statues and a crucifix around 7am.

Further probes led to the arrest of a local, 34, who is suspected to be suffering from mental illness,“ she reportedly said in a statement.

The case is being investigated under Section 295 of Penal Code for damaging or defiling a place of worship with intent to insult the religion of any class of person.