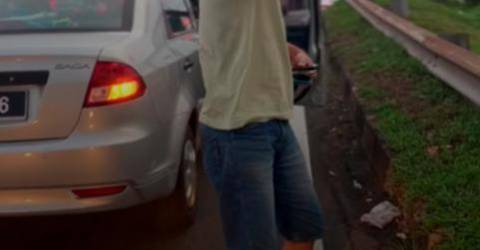 Road rage incidents are usually scary, for both the victims and for onlookers. But a recent road rage incident, presumed to have taken place sometime last week, has brought amusement to netizens, perhaps due to the absurdity of the situation.

Facebook user Deshwinder Singh uploaded a video on the platform purporting to show his encounter with two road bullies, who had gotten out of their vehicle in order to intimidate him.

Allegedly, the confrontation occurred after the duo had cut across several lanes at the Taman Daya ramp, in Pasir Gudang, Johor in their silver Proton Saga.

According to Deshwinder, he and fellow road users were stuck waiting in a 30-minute traffic jam, and seeing the other vehicle cutting the queue caused him to honk at their car.

What ensued after the other driver got out of his car was both comical and highlighted a facet of the Malaysian spirit.

As the driver beckoned for Deshwinder to park along another road to presumably “settle things”, Deshwinder – to the humour of netizens who watched the viral video – then proceeded to unload a barrage of insults that combined several harsh words from different languages.

Perhaps due to Deshwinder’s unflinching multilingual verbal assault, the road bully had a “deer in the headlights” expression, managing to only do the crude hip thrust children are known to do in school before getting back into his car.

At the end of the video caption, Deshwinder apologised if his words had offended anyone, except the two road bullies.

You can watch the video of the encounter here, with a caution for some colourful language.