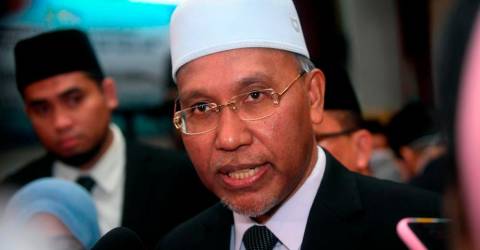 KUALA LUMPUR: Minister in the Prime Minister’s Department (Religious Affairs) Datuk Idris Ahmad (pix) today advised the public not to take the law into their own hands if the sanctity of Islam is insulted by certain parties.

He said the laws in Malaysia were sufficient to punish individuals who committed such acts.

“I don’t want the public to take the law into their own hands. The authorities such as the police, Department of Islamic Development Malaysia (JAKIM), Home Ministry and all enforcement agencies are very efficient in doing their jobs.

“I would like to thank them for taking swift action on the issue of insults against Islam that has occurred a lot lately,” he told reporters after the launch of the national-level Qawwam Men Seminar 2022 at Masjid Wilayah Persekutuan Kuala Lumpur here.

Elaborating, Idris said there were many factors contributing to the act of insulting religion, including the mental state of the individuals involved.

“A sane individual, whether a Muslim or others, will not do things to ridicule a religion,” he said.

Idris said the department is working to create a long-term solution to address the issue using two methods, namely education and legal action.

“We try to educate the public through dakwah efforts in addition to providing explanations and organising various events like today. Secondly, offenders need to be punished according to existing laws,” he said.

Meanwhile, the Qawwam Men Seminar was held in an effort to strengthen the role of men, especially Muslim men, as leaders and protectors of families and society. – Bernama