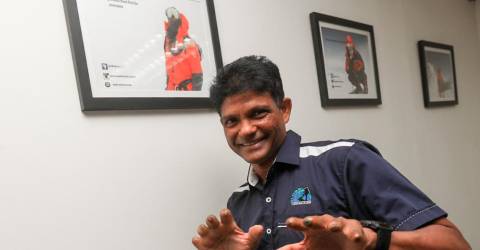 PETALING JAYA: From getting frostbite to losing eight fingers on one of his mountaineering expeditions, mountaineer T. Ravichandran remains an optimist at heart as he prepares for his fourth mission to Mount Everest next year.

Ravichandran, popularly known as Ravi Everest, recently made headlines after conquering the 8,849m peak for the third time on May 12.

This was achieved after he had conquered Everest alone twice, in 2006 and 2007.

“This time it was different as I was carrying the responsibility of having two people with me,” he told theSun at his office in Ampang.

Ravi, 57, who hails from Kuala Pilah in Negri Sembilan, said his love of nature and hiking as a youngster led him on the path to becoming a professional mountaineer. He decided to try hiking at Nepal’s Everest Base Camp at the age of 35.

His dream to climb the tallest peak in the world was initially met with fear by his family and friends.

“There was some hesitation to let me try as there were unknown dangers. Many people then were not aware of the challenges that we could face on Mount Everest. My friends had even asked if I had gone mad wanting to pursue it.

“The experience is just part and parcel of the mountaineering process. I believe that every hiker will have a dream to climb and go through the same process.

“There was no condition under which I could practise. Mount Kinabalu was the best I could do at 4,000m. We didn’t have peaks that were higher to build our confidence. My profile then was not exciting when it came to dealing with sponsorship. Though it initially bothered me, the situation built resilience in myself,” he said.

Ravi disclosed that during recovery from each expedition, his “muscles became very weak, the tissues saggy”.

“I needed to rebuild my strength at the gym and play football. We’d lose 10kg after an 8,000m expedition and I’d also take protein as part of my recovery programme.”

While at the base camp, he spends extra time with his clients to ensure that everyone is prepared mentally.

“We’ve seen people being left behind. I’d isolate myself from my clients because we would be affected emotionally by what we saw.

“Frostbite, snow blindness and dealing with avalanches are somethings that I’ve come across, so I can share these experiences with the community. The fear is still there, but it makes me a better person. Losing the tips of eight of my fingers due to frostbite at Mount Manaslu in 2012 was a harrowing experience but it made me a better person.”

Meanwhile, on his determination to conquer Mount Everest for the fourth time next year, he said thorough preparations to continue his climbing mission are being made, this time without having to use oxygen cylinders.