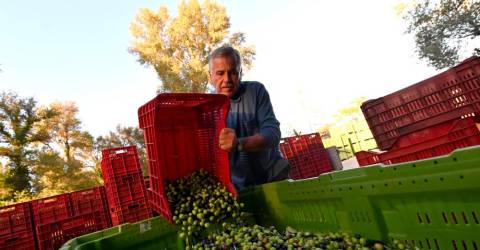 LJUBUSKI: Winemaker and olive grower Jure Susac’s land in Bosnia used to be blanketed with frost or even snow by autumn’s end, but years of rising temperatures now mean balmy weather late into the year.

It was 28 degrees Celsius (82 Fahrenheit) as his family and friends used plastic rakes to help harvest olives in the last days of October, under a radiant sky.

Man-made global warming has amplified extreme events like destructive floods and droughts on Earth, but in Bosnia’s southern Herzegovina region olive growing is booming in its warmer weather.

“The climate has changed here,“ Susac, 68, told AFP. “Winters are no longer extreme, neither is the spring. We practically have no more ice.”

The higher average temperatures give olive trees the conditions they need to grow, and from 2015-2020 the Balkan country’s production more than tripled to 985 tons, official numbers show.

“Olive trees are not at risk of being frozen in winter and damaged,“ said Susac, who plans to double his number of trees to 400.

He was encouraged to expand after an extremely good harvest — five tons of olives, which should yield around 16 litres of oil per 100 kilogrammes (220 pounds).

Back in 1989, Susac was among the first in the region to dare to plant a few olive trees.

“I sought advice from some elderly neighbours who told me that it was never done here, they even mocked me a bit.”

“But, I proved them wrong,“ said Susac who with his wife runs a three-hectare property, 30 kilometres (19 miles) as the crow flies from Croatia’s Adriatic coast.

According to an analysis of the agro-Mediterranean institute (FAZ) in the southern town of Mostar “trends show that global warming is moving olive plantations northwards”.

Weather statistics confirm the findings on the ground.

“The length of the period with average daily temperatures above 15 degrees Celsius is very important for olives,“ said Nedzad Voljevica, an agro-meteorologist of the Sarajevo-based meteorological institute.

Currently there are 192 such days yearly in the olive producing region or 18 days more than the average registered between 1961 and 1990, he said.

Earth has already warmed 1.1 degrees Celsius since pre-industrial times and global heat-trapping CO2 emissions are poised to reach an all-time high this year.

Nations were meeting in Egypt through the end of this week for COP27 climate talks aimed at curbing global warming.

In Bosnia, the rising temperatures have also been accompanied by rarer rains.

Yet for the moment the area benefits from abundant groundwater supplies in a country that, according to the World Bank, has some of the largest water reserves per capita in Europe.

Like many of Bosnia’s several hundred olive growers, all of whom are in the Hercegovina region, Susac has drilled a 300-metre deep well, which provides his olives with a drip irrigation system.

Olive growing in the Balkan country took off in 2005 and FAZ head Marko Ivankovic told AFP that 10,000 to 15,000 olive trees are planted every year.

Yet, this year’s production amounts to some 300,000 litres of extra-virgin olive oil, which means Bosnia remains tiny in an industry that produces 3.1 million tonnes of oil worldwide each year.

However, local producers, including Susac, have won medals in competitions abroad such as in Croatia, the regional leader in the sector.

One producer in Bosnia has even won the gold medal at the NYIOOC World Olive Oil Competition, one of the world’s most prestigious, for the past five years

“Olives give the best results, the highest amount of polyphenols (molecules with antioxidant properties), at the edge of the Mediterranean, which is where we are,“ said Slavko Ramljak, who has 1,300 olive trees and a mill.

“We can’t make Mercedes, but we can produce good olive oil,“ the 70-year-old added. – AFP