But for the small matter of a general election next week, Ann Widdecombe would now be preparing to skip across the stage as Chop Suey in Aladdin at the Spotlight Theatre, Hoddesdon, Herts.

Not any more. The panto must go on without her.

While The X Factor’s Sam Callahan is still in the title role and Brian Blessed is the Genie in the Bottle, Chop Suey has got the chop.

Some might see Hoddeson’s loss as democracy’s gain. Except that Miss Widdecombe’s 11th hour switch from a theatrical pantomime to a political one is no joke. It is a decision which could have profound — perhaps even catastrophic — implications for the entire country, as I will explain.

For Miss Widdecombe has been making a dramatic splash in Plymouth city centre this week. Lunchtime shoppers turn in astonishment as those familiar tones ping forth through the loudpseakers on the roof of the Widdy-waggon. ‘Vote for me! Vote Brrrrr-exit!’ she declaims.

Ann Widdecombe was spotted in Plymouth city centre declaring ‘vote for me! vote for me!’ She became one of the Brexit Party’s MEPs in May’s European elections and is now standing for parliament

Last year, having abandoned a lifetime’s devotion to the Conservative Party for Nigel Farage’s Brexit Party, Ann Widdecombe became one of its MEPs in May’s European elections. Now she is one of its candidates standing for Parliament.

But at what cost to the prospects for Brexit itself?

YouGov’s latest mega-poll gives Labour 45 per cent in this seat and the Tories 40 while the Brexit Party hold the balance of power on 6 per cent.

So, as we enter the final week of campaigning, Brexit’s praetorian guards face a blunt choice: do they really want to get Brexit over the line?

Or, rather than budge an inch on a point of principle, would they prefer to watch it disappear, along with the British economy?

This weekend, at the age of 72, Miss Widdecombe plans to tour the constituency in an open-top bus with Liberty Bell (the Monty Python theme tune) blaring out.

‘If you get people dancing in the street, they won’t hate you,’ she says. And to those who raise two fingers in reply, she has a ready response: ‘Thank you — is that two votes?’ 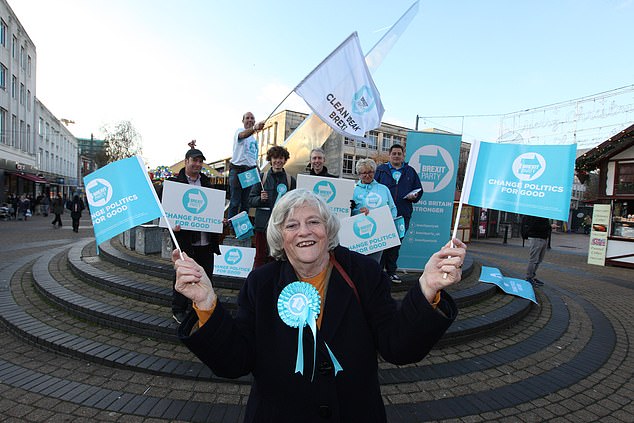 Miss Widdescombe’s views have not changed since she fought Burnley for the Tories back in 1979, in the year Margaret Thatcher came to power

All very laudable but this is not some pointless mid-term by-election or European poll. The stakes could not be higher. And yet a woman who has gallantly served — and been served by — the Tory Party for 40 years is on the verge of causing incomprehensible damage to all that she holds dear.

Miss Widdecombe’s very first contest was fighting Burnley for the Tories back 1979 — the year Margaret Thatcher came to power. And her views have hardly changed since.

She is well-known down here, with a home and family links nearby. But this time she represents one of Labour’s best hopes of clinging on to this marginal seat.

As the Mail’s voting guide makes clear today, it is the same up and down the country in marginal, Labour-held seats where Tory candidates face a narrow defeat if a few hardcore Eurosceptics vote for Farage rather than Johnson.

For, although the Brexit Party has agreed to stand down in all those seats won by Tories last time around — a magnanimous gesture, it must be said — the party is still standing in hundreds of others. 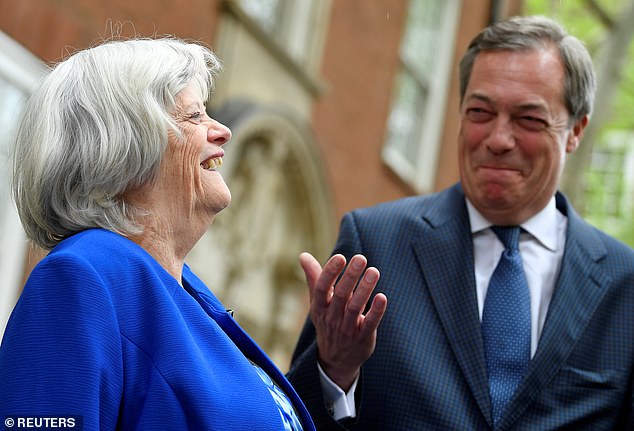 Nigel Farage is photographed with Anne Widdecombe in front of Europe House in London, in April. Miss Widdecombe claims people requesting selfies are ‘just promoting Project Fear’ and wants to ‘stop this nonsense about Vote Brexit, Get Corbyn’

That, in turn, could nobble Tory chances in dozens of marginal seats which hold the key to Downing Street — like this one.

So does she not worry that she may be about to let Labour in ‘by the back door’?

‘You are just promoting “Project Fear”!’ she says crossly as we stroll through the city centre, in between requests for selfies from star-struck fans.

‘I am taking votes from Labour people who would never vote Conservative. Stop this nonsense about ‘‘Vote Brexit, Get Corbyn’’,’ she tells me firmly. ‘Vote Brexit — Get Brexit!’

Tough talk but any objective analysis shows that Ann Widdecombe cannot win this seat but could hand it to Labour.

Most of the Brexit voters I meet are disaffected Tories, like Ben Stanbury, 31, who has a small property maintenance business. 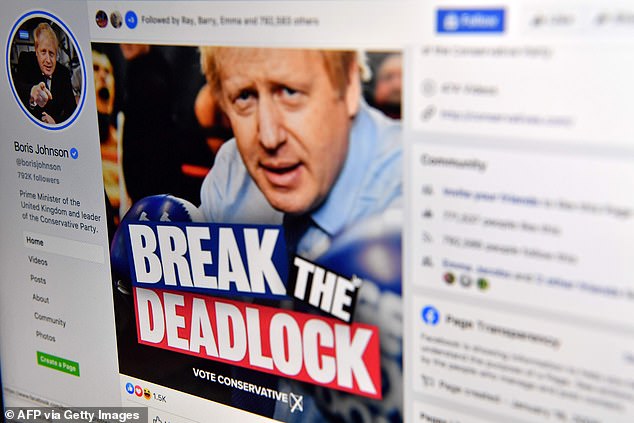 The ex-Tory member says she is tried of people talking about ‘vote Brexit – get Brexit!’

‘How can we be a democracy and yet we’re still in the EU?’ he complains. At the same time, he says his biggest fear is a Corbyn government. ‘We can’t have that joker running the country.’ Yet Mr Corbyn’s best bet, of course, is that thousands of voters just like Mr Stanbury will forsake the Tories.

This is not natural Corbyn country. Plymouth Sutton and Devonport has plenty of maritime history, Royal Navy dockyards and nuclear submarines. Not a place, then, which has much time for Jeremy Corbyn’s nuke-bashing, IRA-hugging world view.

Luke Pollard, the Labour candidate and defending MP — who prised this seat off the Tories in 2017 with a majority of 6,807 — is from the moderate, pro-Remain wing of the party. The Plymouth-born son of a Royal Navy submariner wants to see more warships. 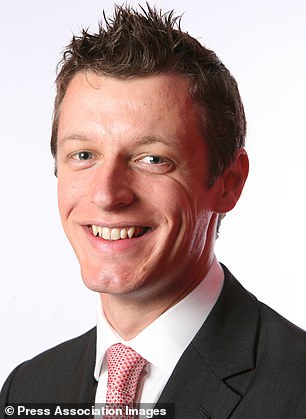 Luke Pollard, the Labour candidate and defending MP, wants to see more war ships, in Plymouth which has not got much time for Jeremy Corbyn’s world view

‘Undoubtedly, some people have been put off by Jeremy and some people just won’t vote,’ he says. ‘But our message on defence is actually quite good.’

It is not, however, an easy message to sell as long as Mr Corbyn and his peacenik Marxist chums are in charge. Time and again, I meet lifelong Labour voters — including a clergyman — who tell me that they simply cannot give their vote to Mr Corbyn. A few mention Brexit but most cite Labour anti-semitism, Mr Corbyn’s soft spot for terrorists and/or financial lunacy.

Up on Hoe Promenade stands the new statue of Nancy Astor, who became Britain’s first woman MP when she won Plymouth Sutton 100 years ago. Mr Pollard was one of those who campaigned for the statue, even though Lady Astor was a Conservative.

He has also helped erect another nearby monument — to Michael Foot. The former Labour leader served as MP for Plymouth Devonport for ten years until he was turfed out — by another female Conservative, Joan Vickers — and relocated to South Wales.

Ann Widdecombe herself stood here for the Tories in 1983 when she tried to unseat the SDP’s Dr David Owen.

Today, yet another determined woman is fighting to capture this seat for the Conservatives.

Rebecca Smith is Plymouth born and bred and a cheerful, energetic local Tory councillor and churchwarden with a particular interest in social justice.

‘Look at me — a classic non-Tory,’ she jokes pointing out that, unlike her Labour rival, she is still unable to afford her own home although she’s in her 30s.

As I follow her around the Labour-leaning Efford area of the city, a woman pops out of a council house to thank her for her work on behalf of local epilepsy sufferers.

In her university days, Miss Smith wrote a dissertation on women in politics. In it, she quoted one Ann Widdecombe. So how does she feel about Miss Widdecombe campaigning against her?

‘It is a shame because this is such a marginal seat and we are fighting a Labour MP who has fought consistently against leaving the EU,’ she says. ‘Ann had a very good run as a Tory MP. But does she now want to scupper Brexit?’ Next week, Miss Smith must pin her hopes on sufficient numbers of Corbyn-phobic Labour voters switching to the Tories while ardent Leavers have to realise that it is the Tories, and not Miss Widdecombe, who can deliver Brexit.

To observe the other side of the Brexit coin, I leave Plymouth and head for the West Midlands key marginal of Dudley North.

Here, the Tories have selected Marco Longhi, a respected, long-serving councillor from nearby Walsall as their candidate in a seat which they came within 22 votes of winning in 2017. And Mr Longhi has had a series of lucky breaks.

First, the highly-regarded and popular Labour incumbent, Ian Austin, announced that he was so disgusted by unchecked anti-semitism in the Labour Party that he was quitting. Furthermore, he also urged his constituents to vote Conservative.

Then, as the deadline for nominations was closing, the Brexit Party candidate, Rupert Lowe, withdrew his nomination. 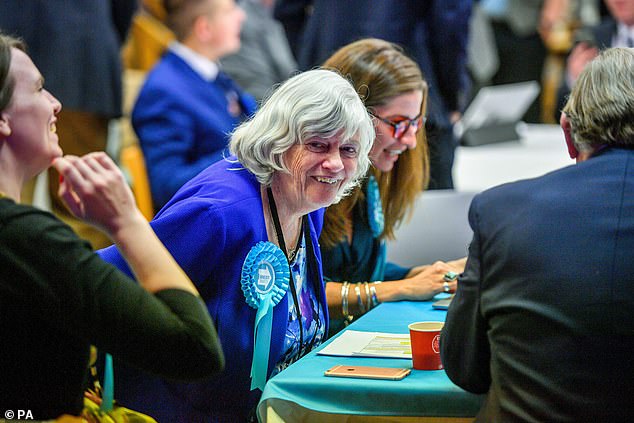 ‘I couldn’t possibly urge anyone to vote Conservative,’ says Ann Widdecombe, standing amid her supporters. Here she is photographed during the European Parliamentary elections count at the Civic Centre in Poole

Opinion polls show that Mr Lowe had been looking at 10 per cent of the vote.

His decision has therefore ensured that Mr Longhi is now the clear favourite to win the seat over Labour’s Melanie Dudley, a local council executive.

It is also abundantly clear that Mr Corbyn is an electoral asset for the Tories here.

‘I’d call myself a socialist but I just don’t trust Corbyn,’ says butcher, Peter Thorpe, He will be voting Tory.

Next door, toy shop owner Dave Carter, says he has just broken the habit of a lifetime. ‘I’ve sent in my postal vote — Tory for the first time,’ he says. ‘We’ve got to sort out Brexit. I voted Remain myself but it’s all about democracy.’

Walking the streets with Mr Longhi, he tells me the message is clear in a town which voted 72 per cent in favour of Leave: ‘There are just two issues. They want Brexit and they don’t want Corbyn.’ Half-British, half-Italian, Mr Longhi was worked all over the world as an engineer and has a Brazilian wife.

On paper, you might expect him to be a diehard Remainer. In fact, he was a passionate campaigner for Leave.

‘When you have seen the world, you realise how noble the British political system, for all its faults, really is,’ he says.

Later, I meet Ian Austin, the outgoing MP. He grew up here, loves the place and has no intention of moving anywhere else.

‘Until this year, I never thought I would be in this position,’ he says.

‘I haven’t joined any other party but like millions of patriotic lifelong Labour voters, I have had to make a decision that once seemed unthinkable: to stop Jeremy Corbyn getting anywhere near Downing Street.’ He remains passionate about getting more inward investment into his home town and says he wishes Mr Longhi all the best. He leaves pretty substantial boots to fill.

So here, then, is the tale of two campaigns. Both are surfing a wave of antipathy to a Labour leader whom many lifelong socialists regard as unelectable.

Yet one seems on course for victory thanks to cool heads and compromise, while the other is in serious doubt thanks to pig-headedness, pride and muddled principles.

‘I couldn’t possibly urge anyone to vote Conservative,’ says Ann Widdecombe, standing amid her supporters. Nearly all of them have poured in from surrounding constituencies — all of which voted Tory at the last election.

As a result, they have no Brexit Party candidate to vote for. So what will this lot be voting on Friday? A tad shame-facedly, they all quietly mutter the same response: ‘Conservative’.