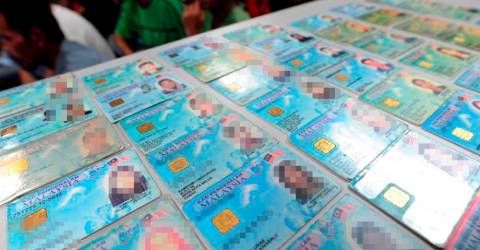 KUALA LUMPUR: The National Registration Department (NRD) has dismissed rumours circulating on social media like WhatsApp that many Bangladeshis have been issued identity cards (MyKad) ahead of the election.

In a statement, NRD insisted that the allegations are not true and that MyKad is only issued to eligible Malaysian citizens based on provisions of the law.

The NRD also wants to clarify that the MyKad on display insinuating that it was issued to (just any) Bangladeshi is not true. On the other hand, it said the Bangladeshi (shown) is a legitimate Malaysian citizen.

“The Bangladeshi was legally adopted and raised by a Chinese family since birth. In fact this issue has been reported by media which explained that the individual is a Malaysian citizen,“ according to the statement.

According to NRD, a police report was made on Oct 23 as the allegation not only tarnishes the department’s image and undermines its credibility, but could also cause public alarm.

“The report was made so that the police can investigate any party spreading the false claim,“ he said.

JPN also cautioned the public to check the validity of any information before sharing it and that legal action will be taken against anyone found spreading false information.

For any queries, the public can contact the NRD corporate communications unit at 03-88807077 or email [email protected] – Bernama