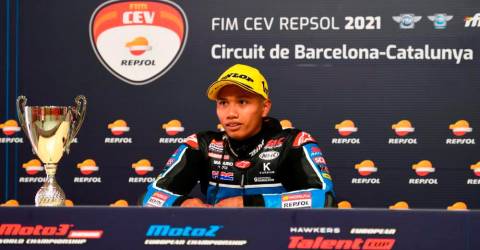 KUALA LUMPUR: “Sepang is my place, my playground, so I know the circuit well…” said young national racer Syarifuddin Azman (pix) as he threw down the gauntlet ahead of this year’s World Grand Prix Motorcycle Championships (MotoGP) Malaysia at the Sepang International Circuit from Oct 21-23.

The youngster, who is more fondly known as Damok, has set himself a target of finishing on the podium in the Malaysia MotoGP, though he was quick to admit that rain could play havoc with his plans.

“Come October, it might rain, so I need to psych myself up to be mentally better prepared,” added the 21-year-old, who has received a wildcard ticket to race with Vision Track Racing Team in the Malaysia MotoGP.

However, if things go according to plan and the weather holds, he is confident he can do great things, thanks to his familiarity with the SIC track.

“I’m also hoping the support from Malaysian fans at the SIC will help me to be more driven on race day,” he told reporters after receiving sponsorship from Racing Boy (RCB) for the MotoGP race.

He explained that the advantage of riding the same machine and having the same crew members as in the FIM Junior GP would also hold him in good stead as he seeks to be among the frontrunners at the Malaysia GP.

“The crew has become like my own family, I am comfortable with and confident in them… I am confident that I can do it,” said Damok, who is now third out of 27 riders in the Junior GP with 107 points and who will be featuring in the Moto3 category of the MotoGP for the fifth time – all via wildcard entries.

In another development, SIC chief executive officer Azhan Shafriman Hanif said almost 50 per cent of the tickets for the Malaysia MotoGP have been sold.

“About 8,000 motorsports fans from Indonesia are expected to attend the race here and, so far, 5,000 of them have bought tickets,” he added.

Azhan Shafriman is confident that the SIC will be able to achieve its target of 170,000 spectators based on its commitment and vast experience as the main organiser of the championships.-Bernama