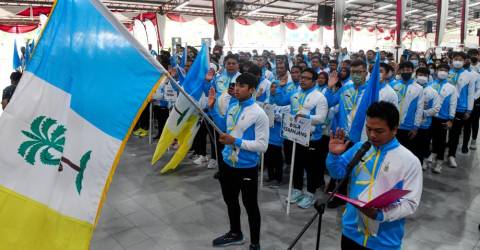 BALIK PULAU: Penang are targeting 26 gold at the 20th edition of the Malaysia Games which will be held around the Klang Valley from Sept 16 to 24.

State Youth and Sports Committee chairman Soon Lip Chee said the Penang contingent will participate in all 31 types of sports that will be contested with the involvement of a total of 488 athletes, 102 coaches and 43 team managers.

“We won 32 gold medals in the 2018 edition, this time we are aiming for 26 because some categories of sports events have been reduced such as in badminton, there used to be a team competition but this time only for individuals.

“Among the gold prospects are karate, silat, judo, archery, sepak takraw, gymnastics and also some other events,“ he told reporters after the State Flag Handing Over Ceremony to the contingent to the Games here today.

“For those who break national records, an incentive of RM1,000 will be given while RM500 for new Sukma records,” he said.

He added that the gold target was realistic and was confident that the state contingent would achieve it. -Bernama