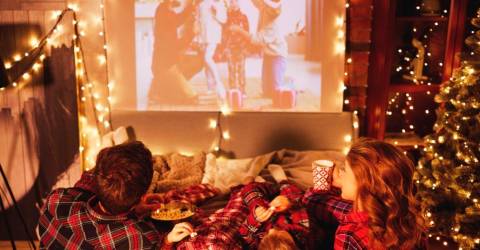 SPARKLING Christmas trees, the unique aroma of hot cocoa, warm fuzzy blankets and slippers, and being surrounded by your loved ones – it doesn’t get any better than this. Celebrating this joyful season is more than just building gingerbread houses and baking Christmas themed cookies, it’s about revisiting the classics and the best Christmas movies as well.

Here are six yuletide movies that you can delve into to make the best out of your holidays!

Featuring two Malaysian celebrities, Henry Golding and Tan Sri Michelle Yeoh, Last Christmas will definitely take you on an emotional rollercoaster ride. Set in London, this film tells the story of a self-destructive young lady named Kate who works as an elf in a year-round Christmas shop. While she constantly messes things up, things start to change when she meets Tom, a charming young man. Inspired by Tom’s compassion, Kate vows to be a better woman. As the Christmas season creeps in, their growing attraction transforms into the best gift anyone could ever ask for – a yuletide love story.

Does the phrase “Get outta here you nosy little pervert, or I’m gonna slap you silly” ring a bell? Although there are a number of fun new movies, there’s nothing quite like this Christmas classic that continues to stand the test of time, even 29 years after it was released!

While the rest of his family are en route to Florida, Kevin McCallister pulls a classic Kevin move when he loses track of his dad at the airport and ends up on a plane to New York. Of course, if you’ve watched the first Home Alone film, you’d know what to expect here.

Kevin is his usual mischievous self, swindling his way into a luxurious room at the Plaza Hotel. As he begins performing his usual antics alone in the Big Apple, the young boy finds that the Sticky Bandits, Harry and Marv are back on the street. Now, Kevin is determined to prevent the crooks from stealing from an old man’s toy shop, just before Christmas.

You know you’re in for a laugh when Will Ferrell and Mark Wahlberg are the main actors in a film. After finally becoming friends in Daddy’s Home (2015), this sequel centres on two reformed fathers, Brad and Dusty, who must now work and deal with their own meddlesome fathers who are visiting during the festive season.

In a log cabin located in Great Barrington, Brad and Dusty gear up to make Christmas perfect for the children. Their fresh friendship soon gets tested when Dusty’s father Kurt starts to stick his nose into everything. When Brad and Dusty start fighting like cats and dogs, Brad makes the decision to invite Dusty’s stepdaughter’s biological father, Roger, as payback for Dusty.

With Roger in the picture, will these two succeed at making this festive season the best Christmas ever?

Another movie that is bound to touch your emotions is Preston A. Whitmore II’s masterpiece, This Christmas. Of course, everyone has their own issues to deal with, and that’s exactly how things are in this movie. As the family matriarch Ma’Dere Whitfield gathers her large family for the first time after several years, everyone has unwittingly booked their ticket for a classic family drama. When previously hidden topics start to arise between The Whitfields, it usually ends up with a fight. One sister is trying to encourage her siblings to sell the family dry cleaning business and divide the profits while the other brother is trying to escape from loan sharks. Meanwhile, another brother is going AWOL from the Marine Corps and another sister brings along a man that she has been dating. With all these issues affecting the family’s dynamic, how will Christmas turn out for The Whitfields?

From classic animated yuletide movies The Grinch and Tim Burton’s The Nightmare before Christmas, now comes another must-watch gem during Christmas, Arthur Christmas. If you would like to experience the true magic of Christmas, you might want to give this one a shot. This movie introduces you to Arthur Claus, Father Christmas’s youngest son, who is clumsy but kind-hearted. When Arthur discovers that Santa’s hi-tech ship failed to deliver a girl’s gift, he goes on a mission to deliver the present before Christmas morning arrives. Through his mission, he is accompanied by his reckless grandfather, a group of rebellious yet passionate elves who are obsessed with wrapping presents for children and a team of eight tough, magical (but inexperienced) reindeer.

While the majority believe in the existence of Santa Claus, some are still curious about his existence. This movie’s plot focuses on two siblings, Kate and Teddy Pierce, who join forces to capture Santa Claus on camera. When Kate watches an old Christmas video, she spots a strange arm appear out of their fireplace. She is then convinced that Santa is real and begins reaching out to her brother to prove Santa’s existence. When Teddy gets sceptical, she decides to blackmail her brother. As they prepare the trap to catch Santa, their mission takes an unexpected turn and it starts becoming a journey that every child can only dream about.