Thousands of festive party-goers took to the streets of London and New York today dressed in Santa costumes to spread Christmas cheer.

The annual Santacon pub crawl describes itself as ‘a non-profit, non-political, non-religious and non-sensical Christmas parade’ where people are encouraged to dress in festive outfits for charity.

And as well as a Santa outfit, including more than just a hat, participants are asked to download carol sheets to spread their Christmas cheer for all to hear.

The parade that originated in San Francisco invites people to ‘join the naughty list’ and down drinks in bars and open spaces.

But people are warned to not be ‘that’ Santa and advised to not ‘let your Christmas cheer become another’s grief’ after a few too many.

In London Santas were spotted scaling the Duke of Wellington statue overlooking Bank station while party-goers in the Big Apple flooded Times Square.

Bad Santa! One man is seen scaling the equestrian statue of the Duke of Wellington overlooking Bank Station in London 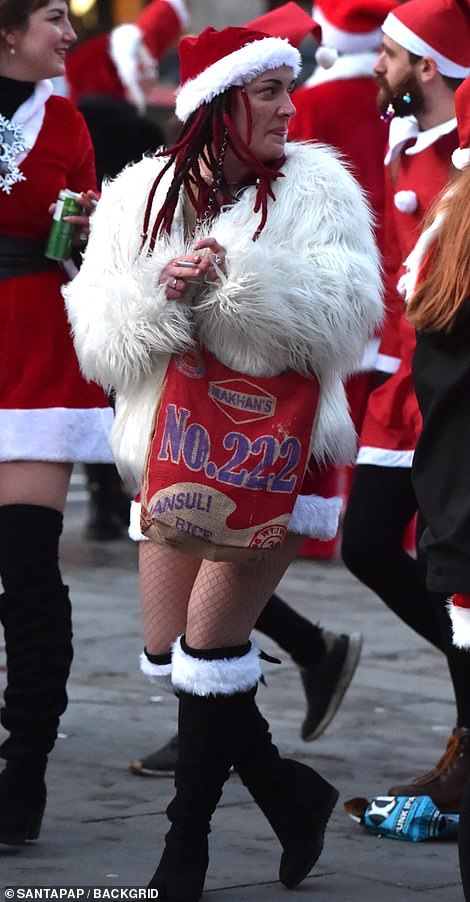 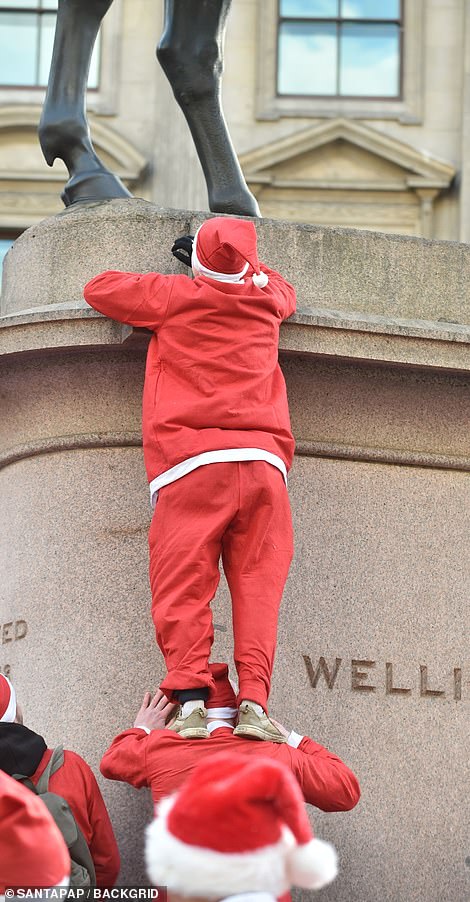 A woman dresses in knee-high boots and a Santa hat in London after a day of drinking and being merry (left). A naughty Santa decides to climb on the statue outside the Royal Exchange in London and gets a helping hand from a fellow Santa (right) 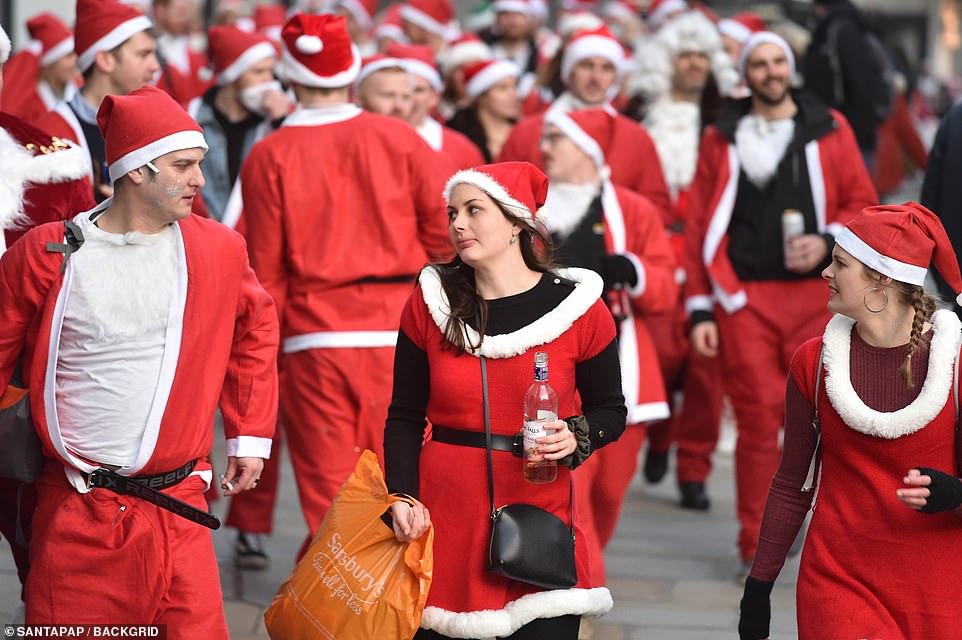 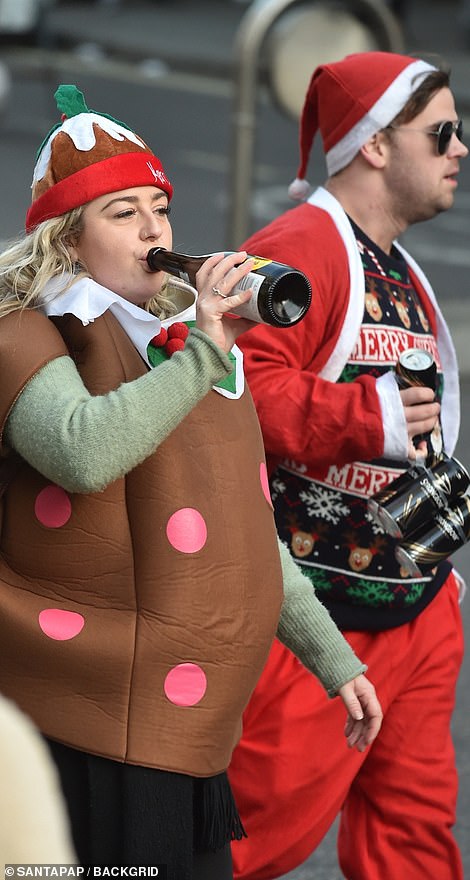 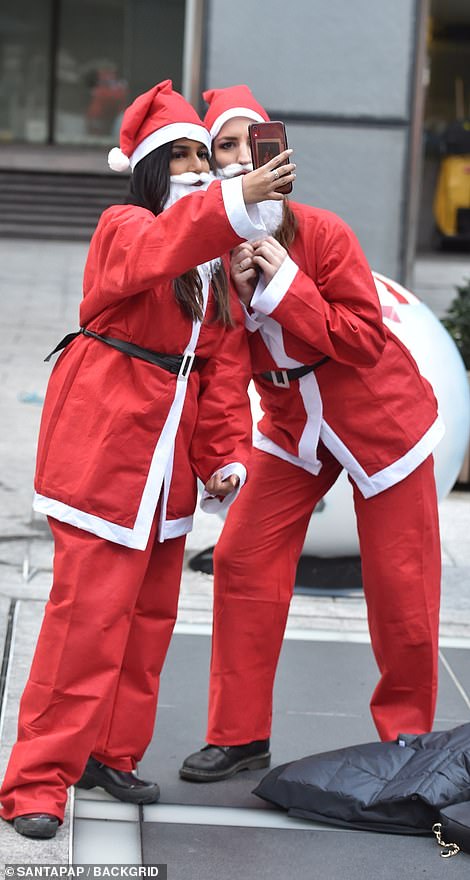 A very merry pudding: One party-goer dressed as a Christmas pudding drinks on the go (left). A pair of Santas take a selfie on their route around London (right) 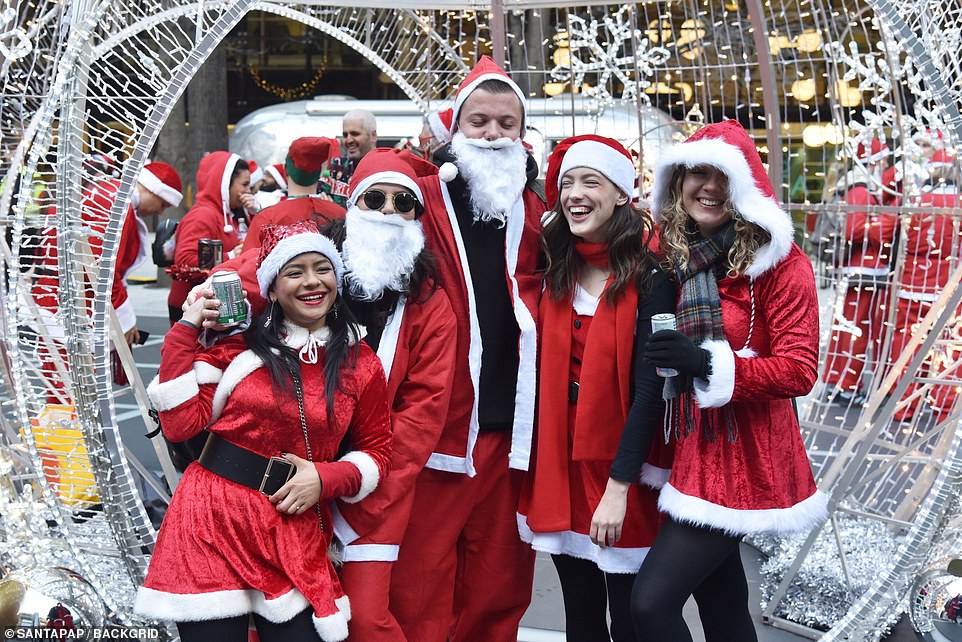 Cheers! A group of Santas pose for a photograph in London as they braved the cold for the annual festivities on both sides of the Atlantic 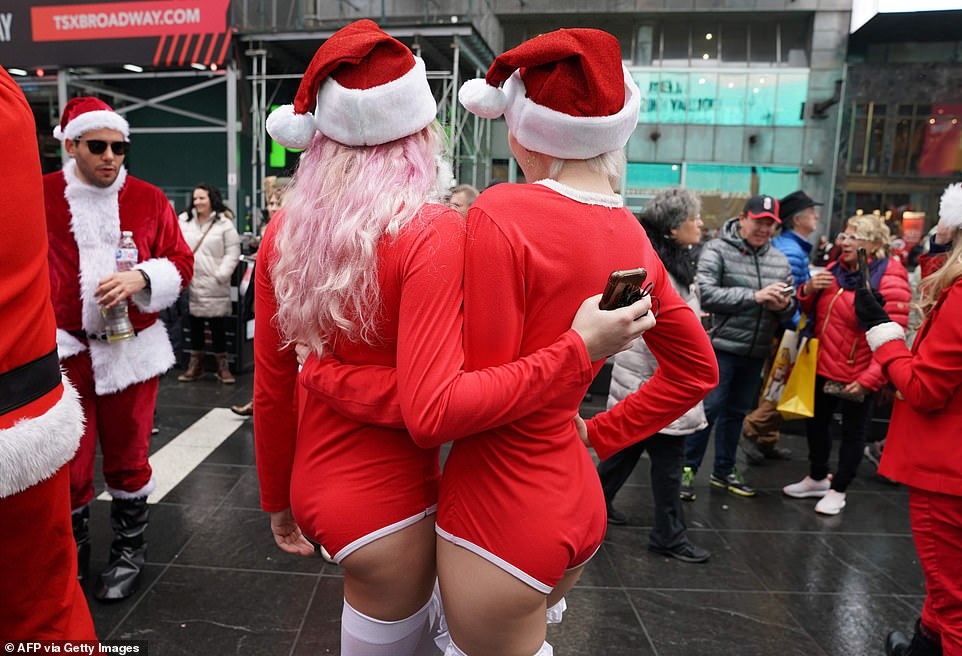 Strike a pose: Revellers gather in New York City for the start of the Santacon bar crawl 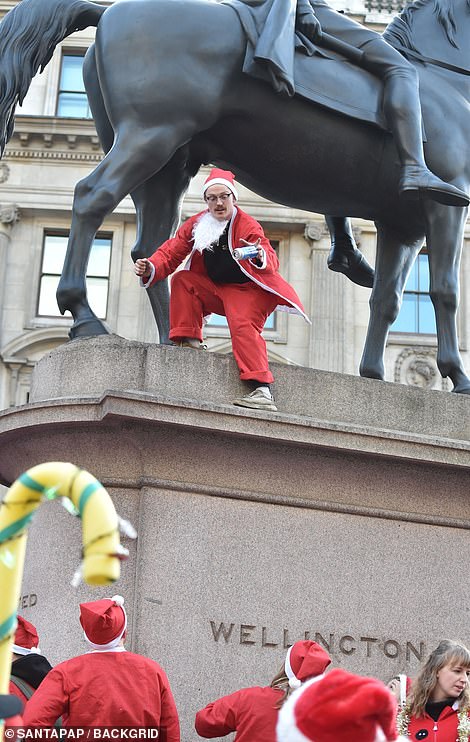 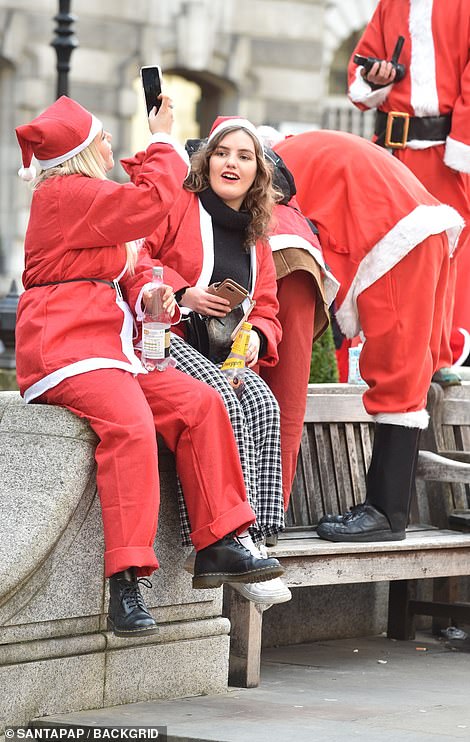 One man is seen on the statue near Bank Station in London (left). A woman takes a picture of other Christmas revellers (right) 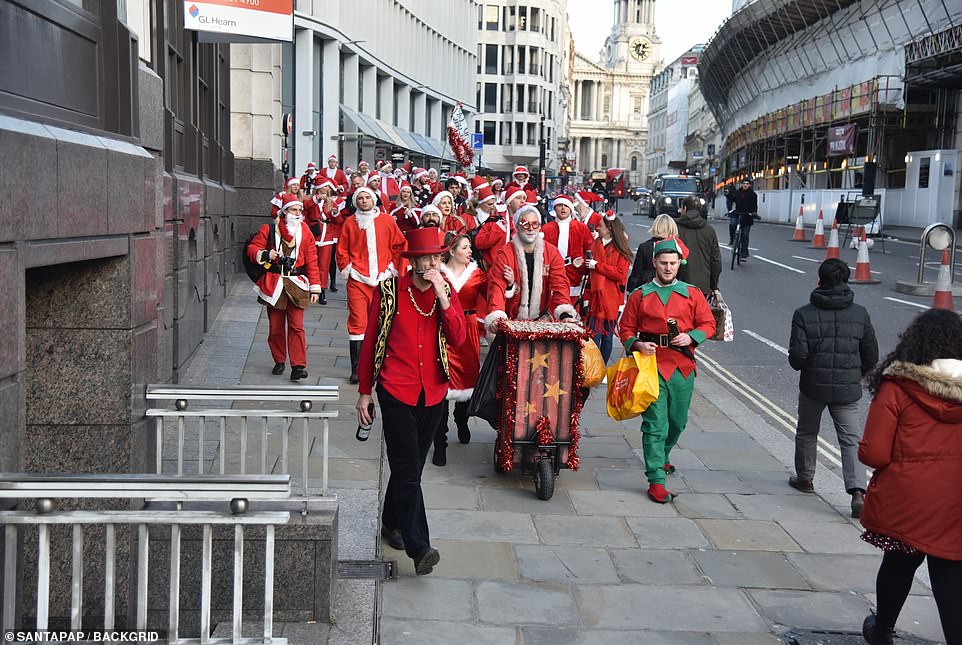 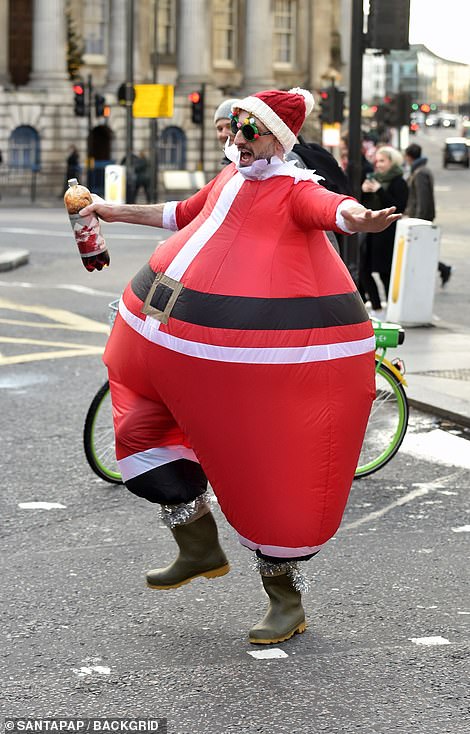 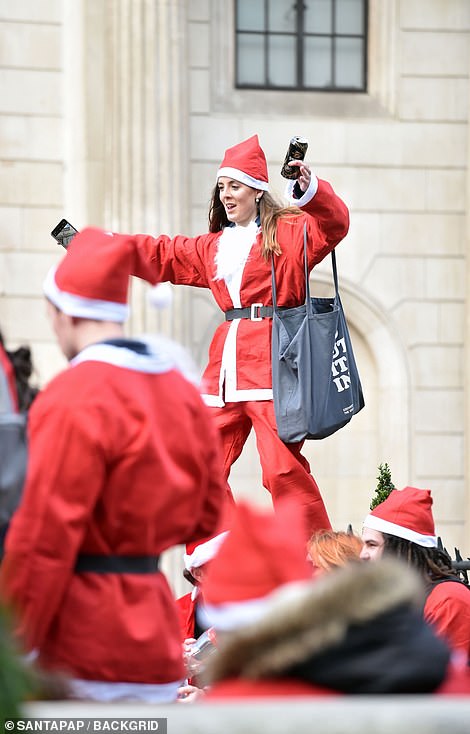 One man wears an inflated Santa suit for the pub crawl (left). A woman is captured with a drink in hand as she soaks up the festive cheer (right) 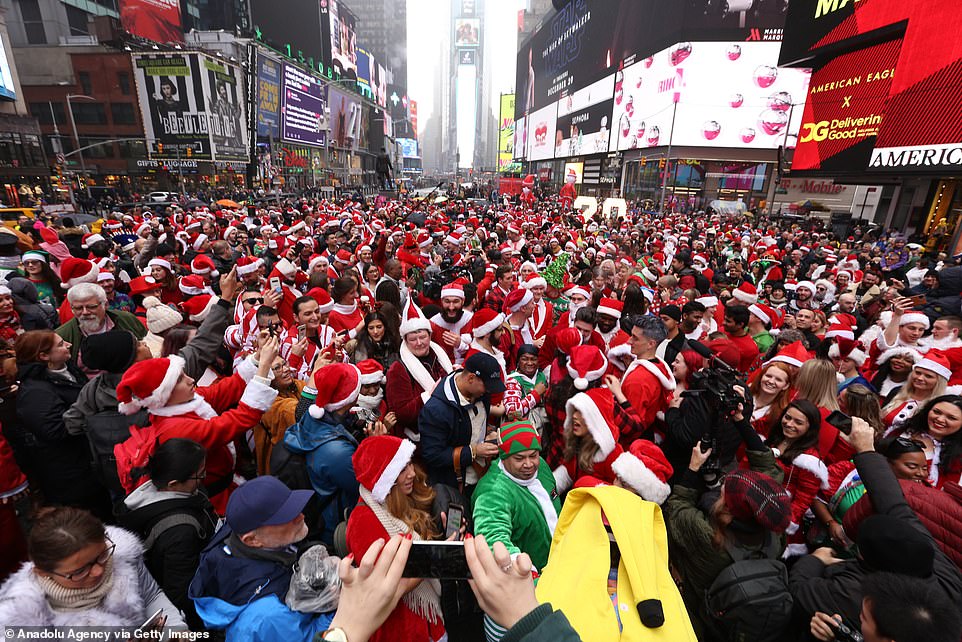 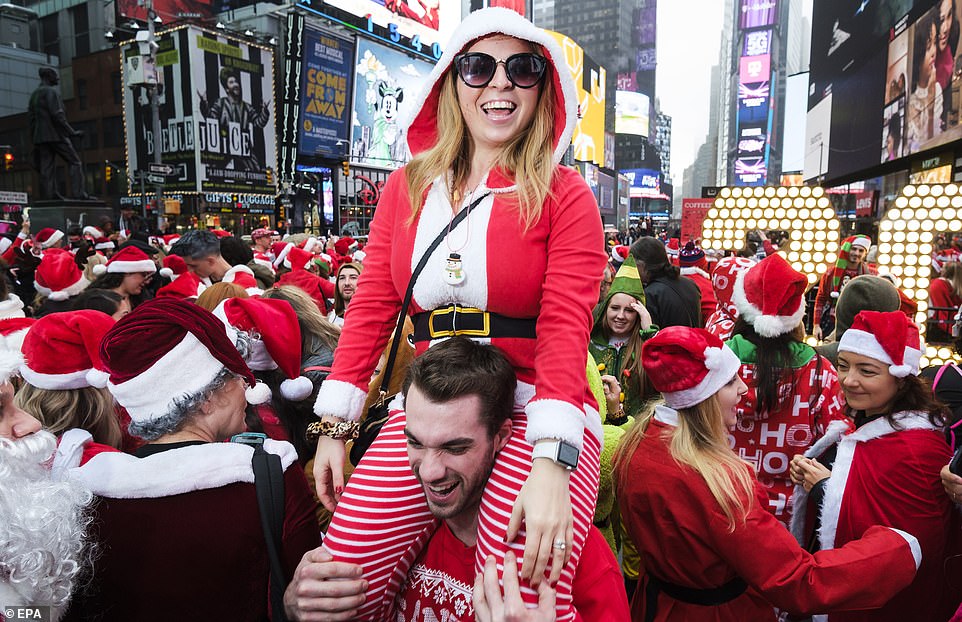 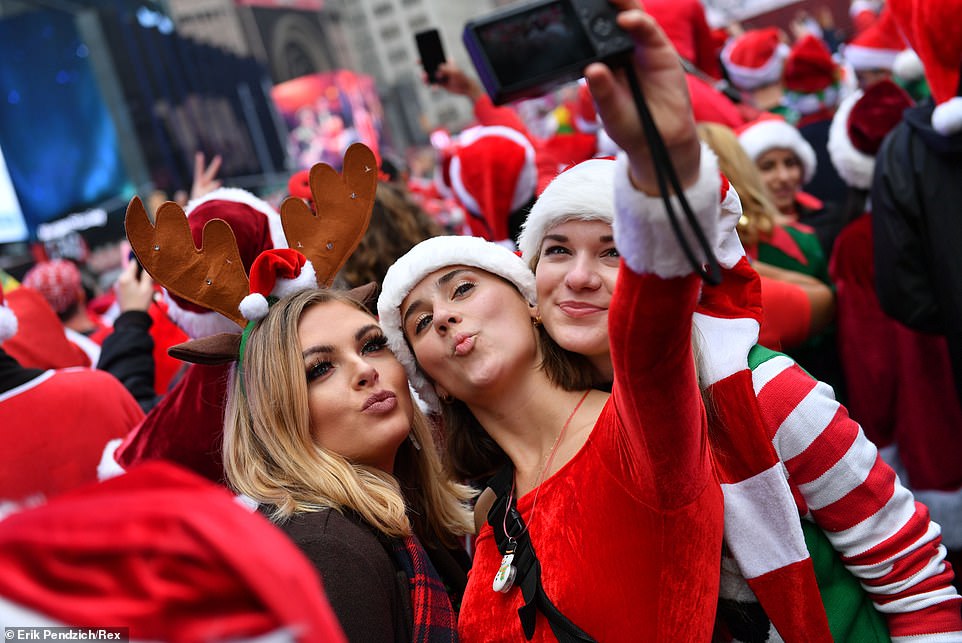 An elf, reindeer and Mrs Claus pose for a selfie for Santacon NY as they are joined by hundreds of others who join together to spread the spirit of Christmas 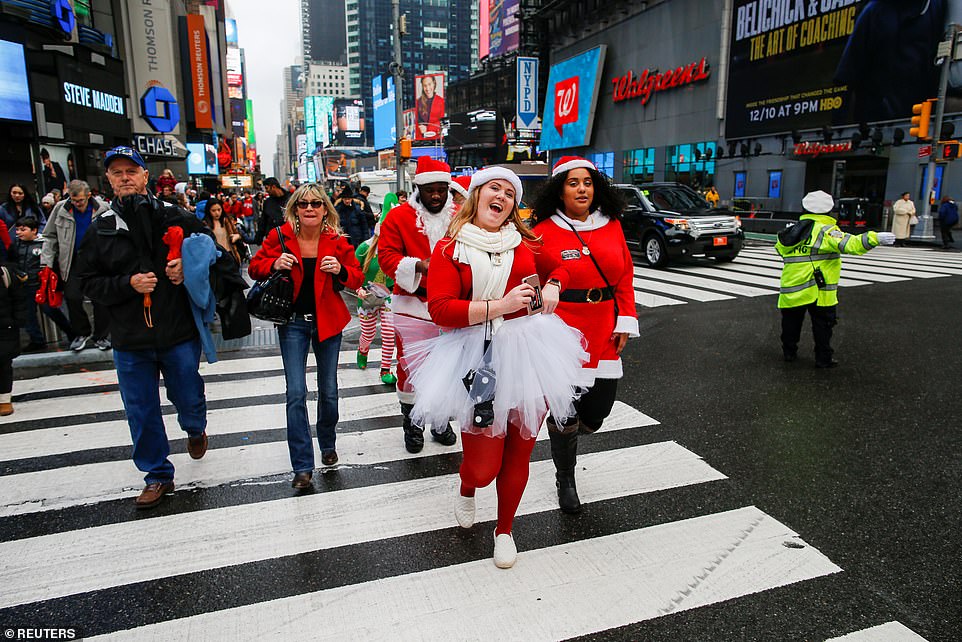 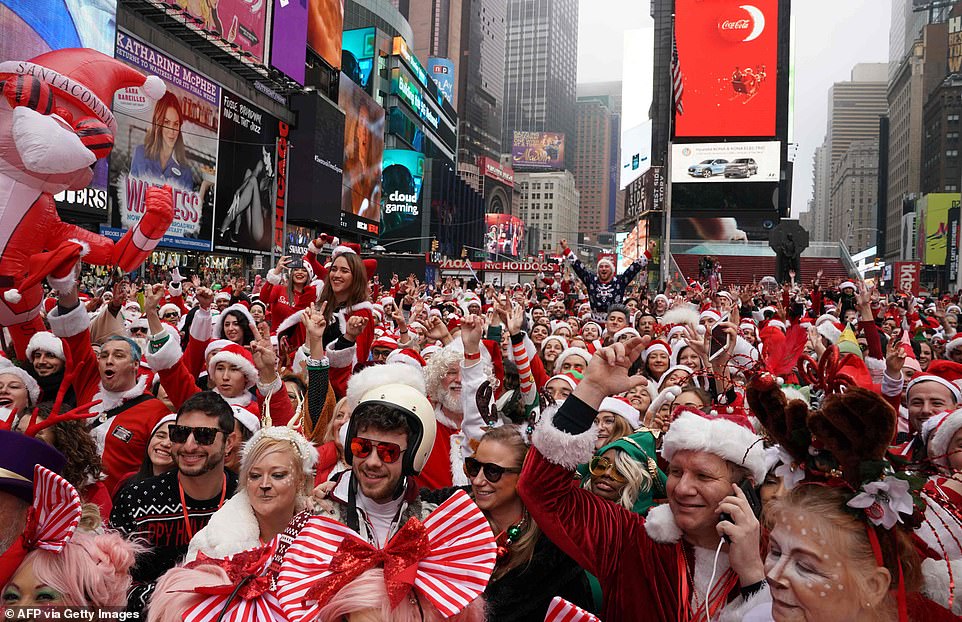 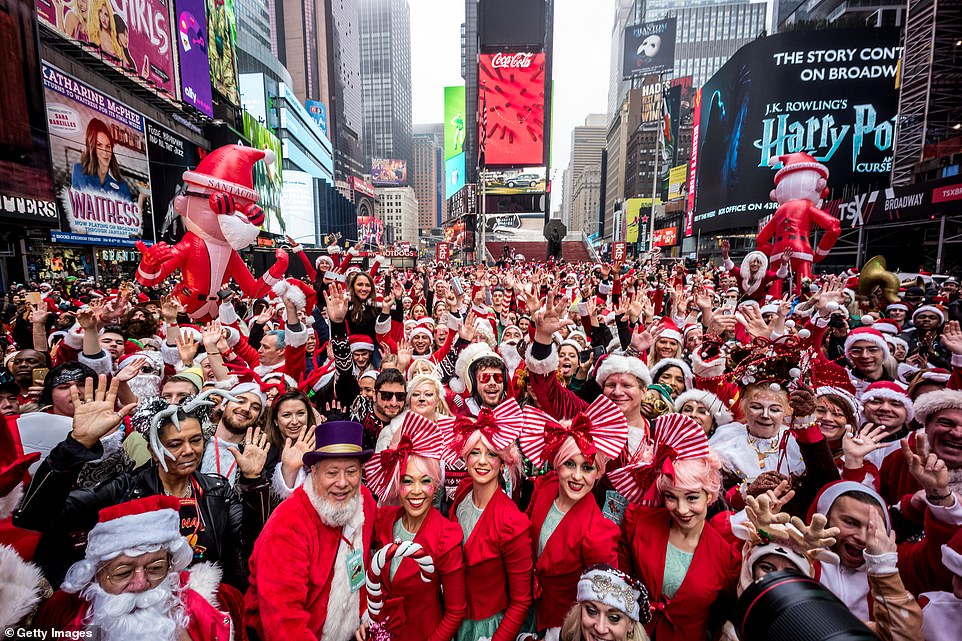 Revellers gather for the start of the Annual SantaCon Bar Crawl at Father Duffy Square, a section of Times Square 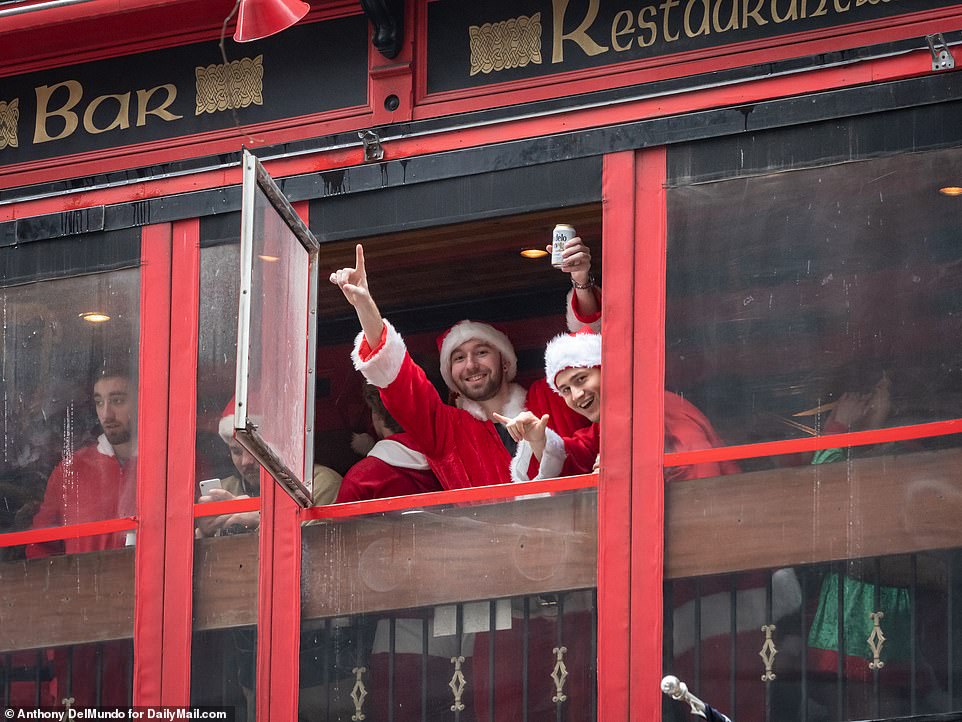 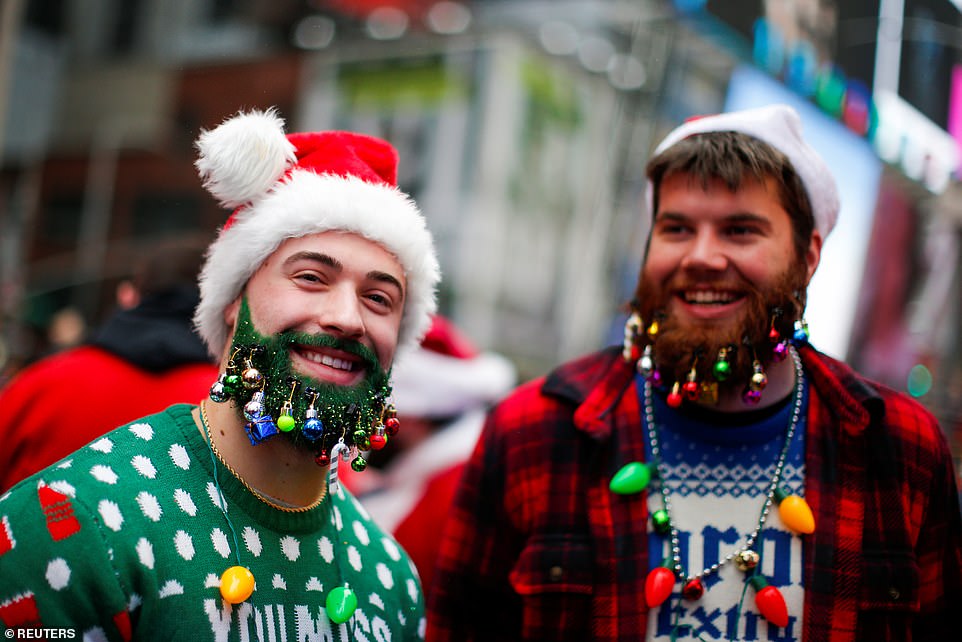 Merry and bright! Some revellers decide to decorate their facial hair with baubles and glitter as they take to the streets of New York 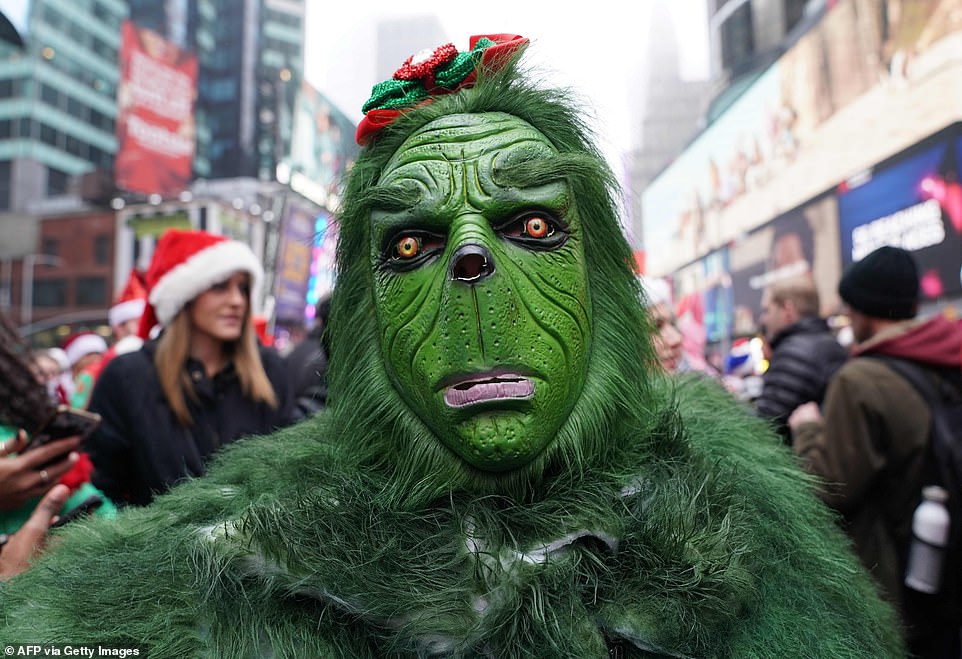 Bah Humbug! An attendee dresses as The Grinch in a furry green outfit with a mask on to join hundreds of others in Times Square 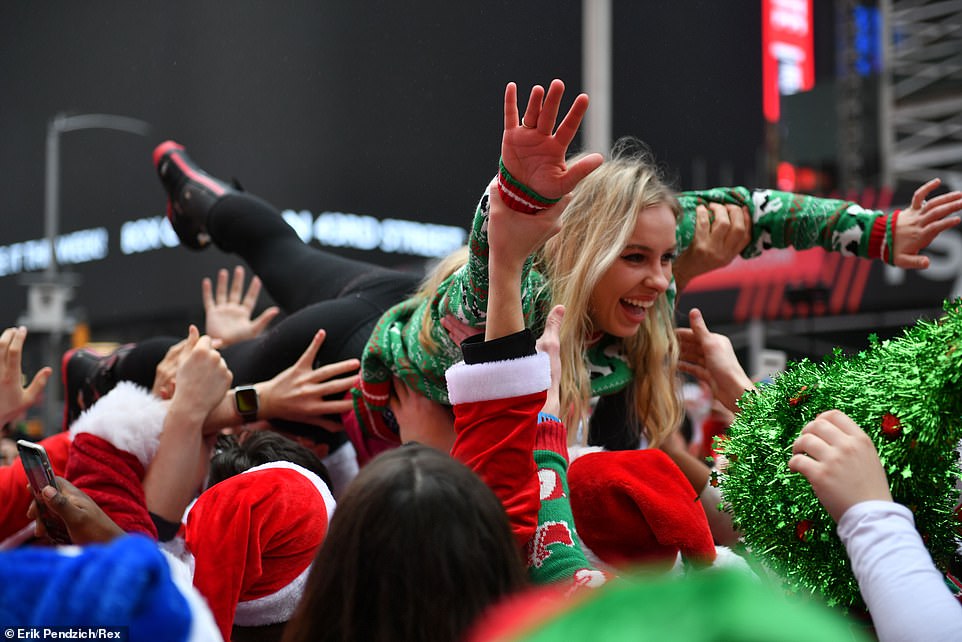 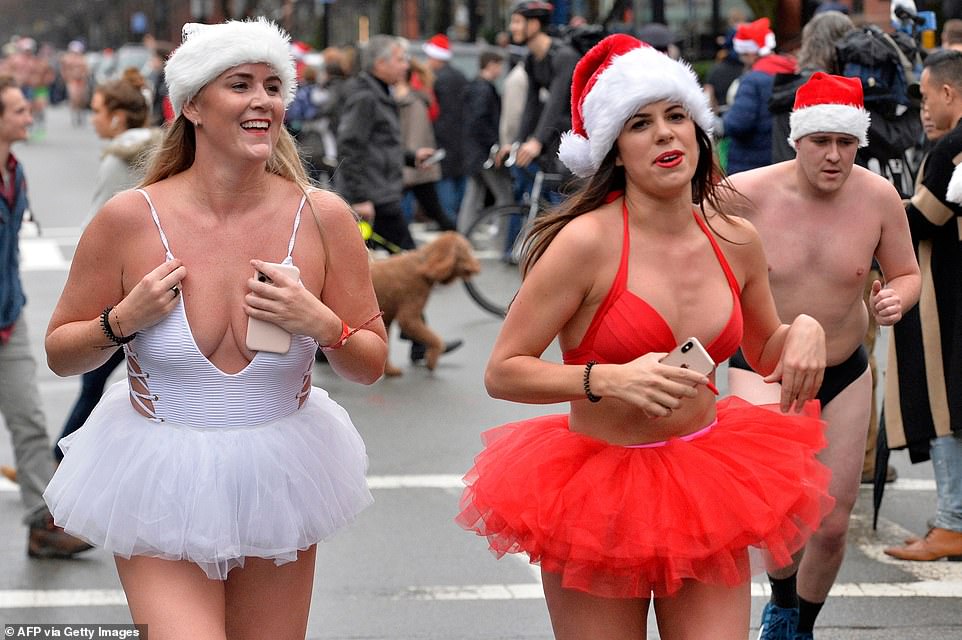 On the run: Runners make their way down Newbury Street during the 20th Annual Santa Speedo Run in Boston, Massachusetts 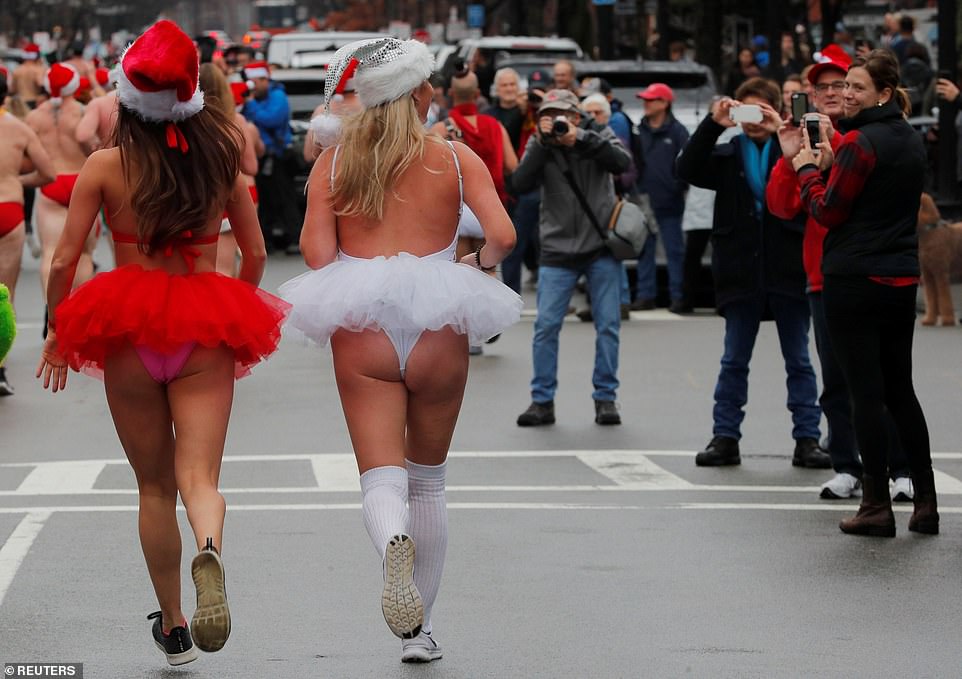 Cheeky: Participants take part in the 20th annual Santa Speedo Run through the Back Bay neighborhood in Boston, Massachusetts 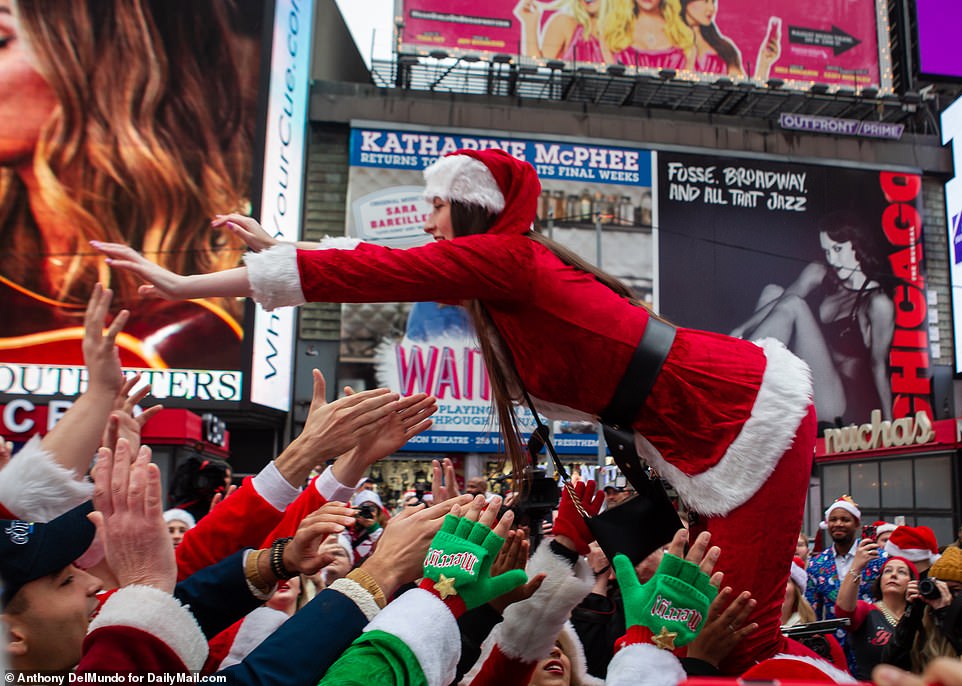 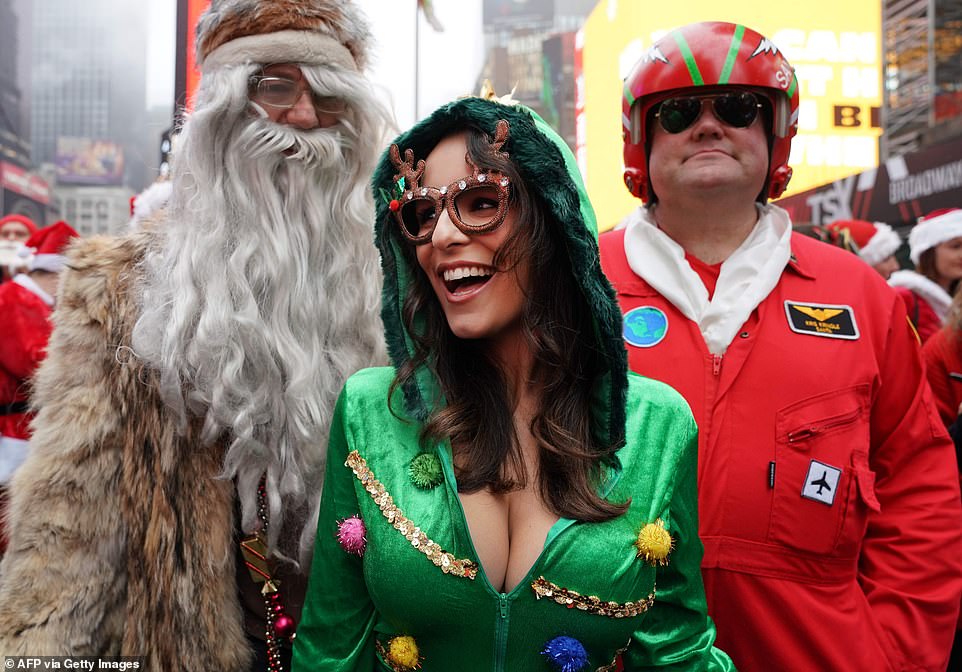