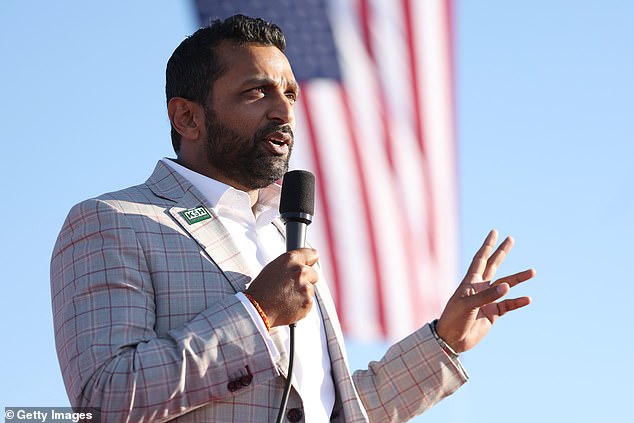 A top national security aide to Donald Trump has been granted immunity from prosecution in order to allow him to testify about the storage of classified documents at Mar-a-Lago.

Kash Patel, 42, told Breitbart News in May that the former president declassified troves of information prior to leaving the White House.

Thousands of documents – many of them classified – were found in storage at Trump’s Florida estate, Mar-a-Lago, following a series of raids.

After the third and final search, on August 8, the FBI opened an investigation into whether classified information was mishandled.

Patel in early October appeared before a grand jury as part of the investigation, but invoked the Fifth Amendment multiple times, saying he could not speak for fear of incriminating himself.

On Wednesday multiple sources confirmed that Patel had been granted immunity, as had been widely predicted, in order to obtain his testimony.

Kash Patel, 42, has been granted immunity to testify about Donald Trump’s storage of documents at Mar-a-Lago. Patel was a senior national security advisor to the then-president, and remains a strong ally 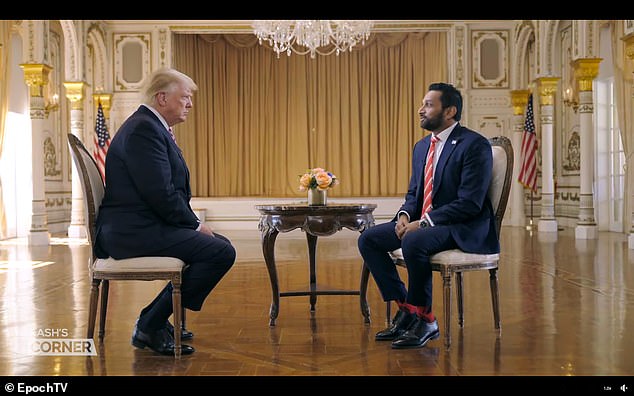 Patel is seen in February interviewing Trump for The Epoch Times 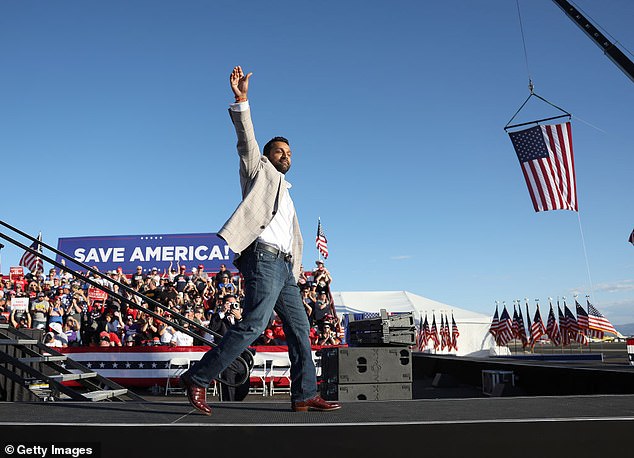 Patel in early October appeared before a grand jury as part of the investigation, but invoked the Fifth Amendment multiple times, saying he could not speak for fear of incriminating himself 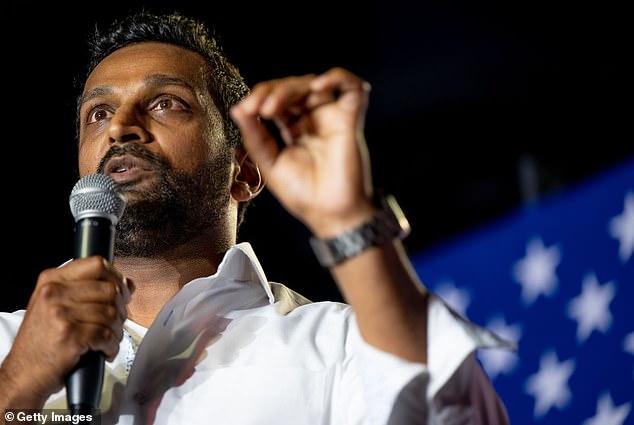 On Wednesday multiple sources confirmed that Patel had been granted immunity, as had been widely predicted, in order to obtain his testimony 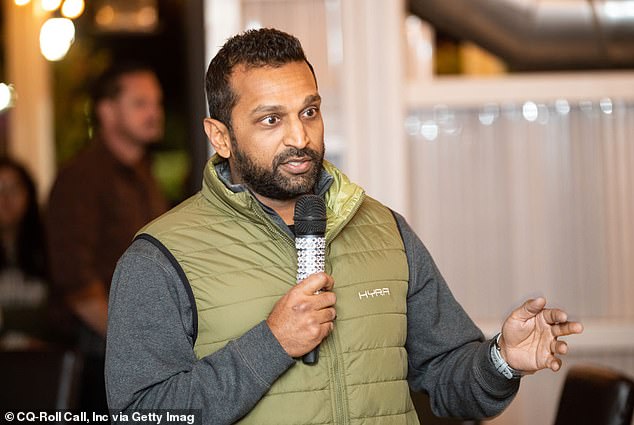 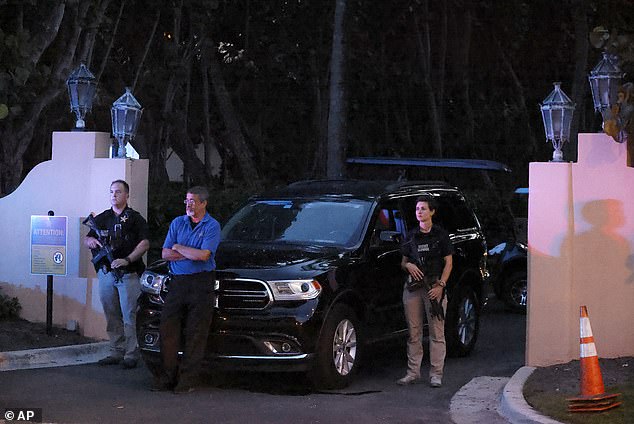 Agents stand guard outside Mar-a-Lago on August 8, as the FBI was searching the property 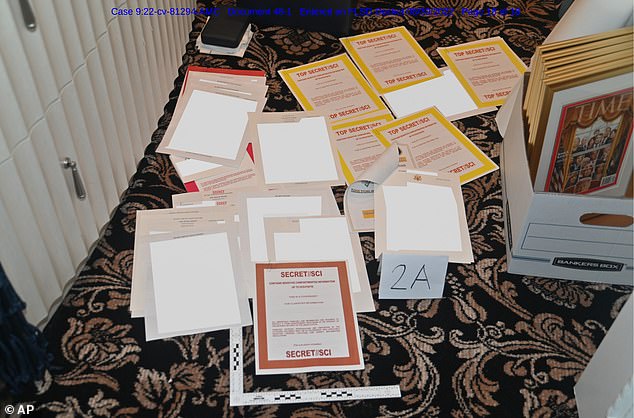 Documents seized during the search of Trump’s estate on August 8 are pictured on August 30. Trump’s lawyers have declined to say in legal filings whether Trump had ordered them declassified while he was in office and had the authority 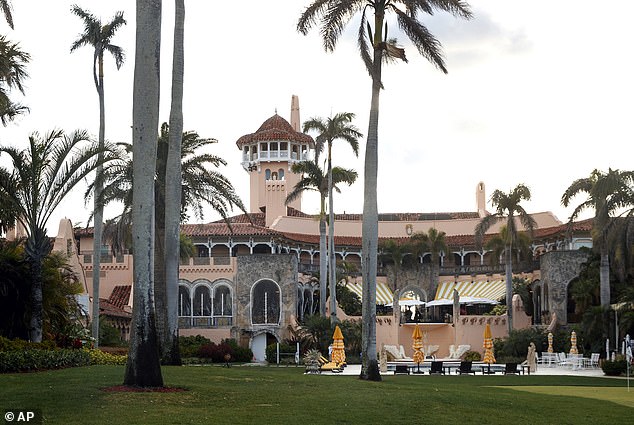 Thousands of documents – many of them classified – were found in storage at Trump’s Florida estate, Mar-a-Lago, following a series of raids

Patel, a staunch Trump loyalist, is a key player in the Trump team’s efforts to fight off the Justice Department investigations into Trump and his allies.

Earlier this year, amid the repeated requests for Trump to hand the documents over to the National Archives and Records Administration (NARA), Trump made him one of his representatives to NARA.

Patel in May told Breitbart News: ‘Trump declassified whole sets of materials in anticipation of leaving government that he thought the American public should have the right to read themselves.

‘I was there with President Trump when he said “We are declassifying this information.”‘

Among the documents found in the search were files related to Iran, China, and French President Emmanuel Macron.

In the third and final search on August 8, agents seized about 13,000 documents – 103 of them classified and 18 of them top secret, according to court papers.

Trump himself has repeatedly said that he declassified the documents.

In September, he told Fox News host Sean Hannity that as president he could declassify documents just by thinking it. 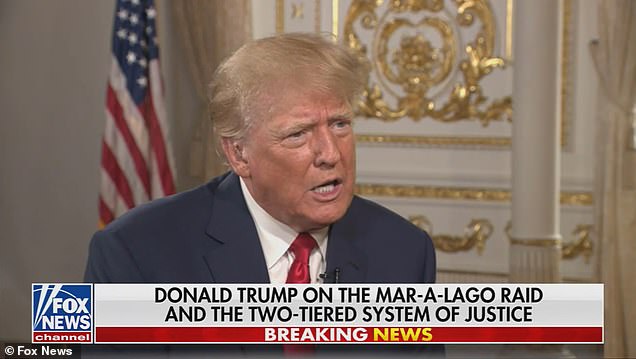 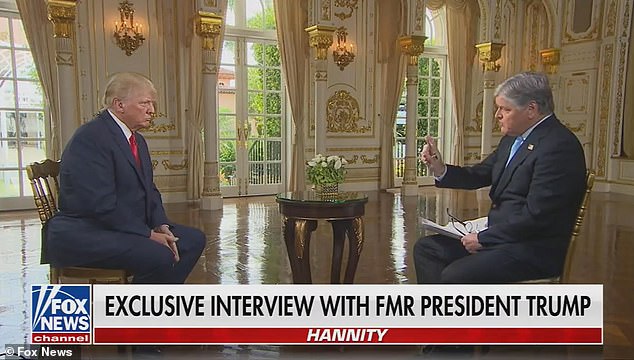 Trump told Sean Hannity, in an interview from his Mar-a-Lago home, that he could declassify documents just by thinking about it 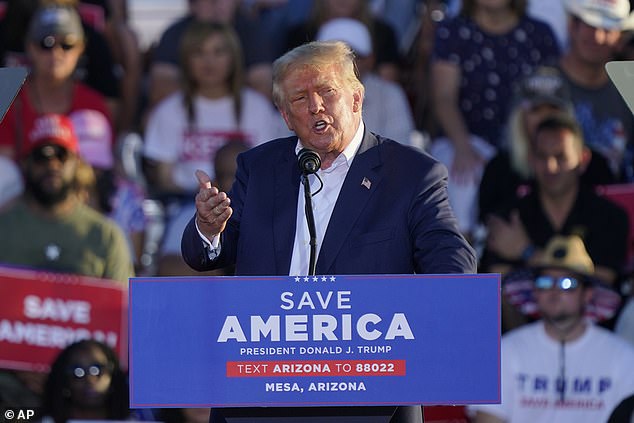 Trump is pictured on October 9 speaking at a rally in Mesa, Arizona. He has claimed he declassified the documents

Hannity asked him whether the documents seized over the course of three searches – in January, June, and August – were declassified, as Trump has repeatedly claimed, and the former president replied: ‘I did declassify, yes.’

Hannity asked him how they were declassified.

‘There doesn’t have to be a process, as I understand it,’ Trump said.

‘If you’re the president of the United States you can declassify just by saying it’s declassified. Even by thinking about it – because you are sending it to Mar-a-Lago or wherever you’re sending it.

His own lawyers, however, have stopped short of claiming in their legal arguments that he declassified the files.

What are classified materials and who can declassify them?

The letter from the National Archives and Records Administration to Congress stated that it has identified items ‘marked as classified national security information’ within 15 boxes of information returned by Trump from Mar-a-Lago. The government maintains various levels of classified information. According to the Senate Intelligence Committee, ‘Top Secret’ information applies to information that could reasonably be expected to cause exceptionally grave damage to the national security.

One level down is ‘secret’ information, which could ‘reasonably could be expected to cause serious damage to the national security.’ Below that is information that is merely ‘confidential.’ That applies to information, ‘the unauthorized disclosure of which reasonably could be expected to cause damage to the national security.’ Notably, the letter from Archivist of the U.S. David Ferriero did not state at what level the information is classified.

The government classifies voluminous material, and there is a longstanding effort by watchdog groups and some lawmakers to reduce the amount of classification. The Washington Post previously reported that some of the documents Trump took to Mar-a-Lago were clearly marked as classified, with some at the ‘top secret’ level.

It reported some were ‘extremely sensitive’ and would be limited to a small group of officials. It is a crime to mishandle classified information, and the letter from NARA states that it has been ‘in communication’ with the Justice Department.

The president has broad unilateral authority to declassify information. In 2019, Trump tweeted out a high-resolution image of an Iranian rocket launch, leading to questions about whether he had put out classified information. He later tweeted: ‘We had a photo and I released it, which I have the absolute right to do.’